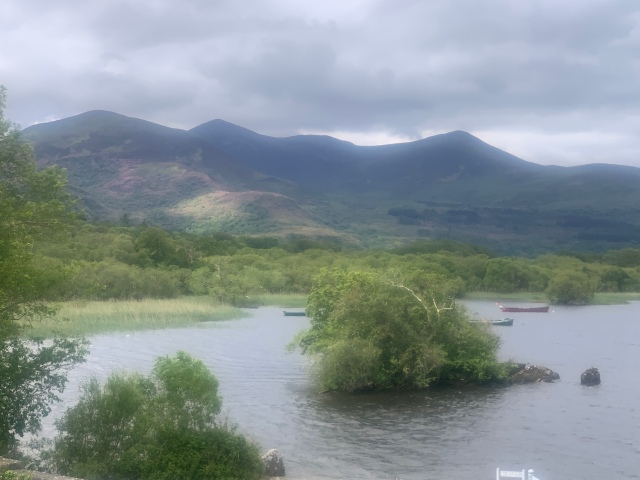 We got off to a slow start after a late night. We’ve been watching the HBO mini series Chernobyl; addictive even in the dreadfulness of it. 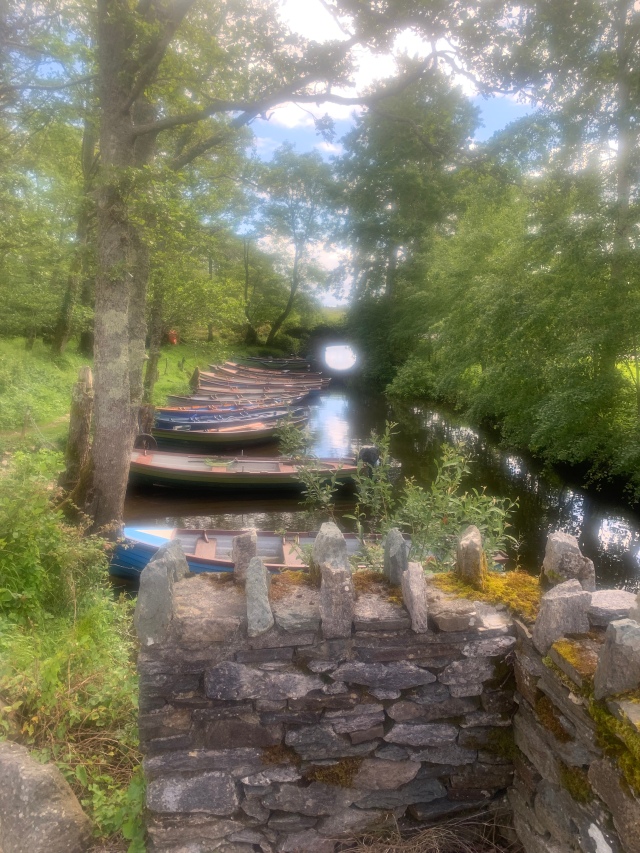 Today was a long driving day, but so worth it considering the beauty we saw. We headed southwest from Limerick toward Killarney, with me at the wheel. Thankfully the roads were the larger variety and it was easy going. 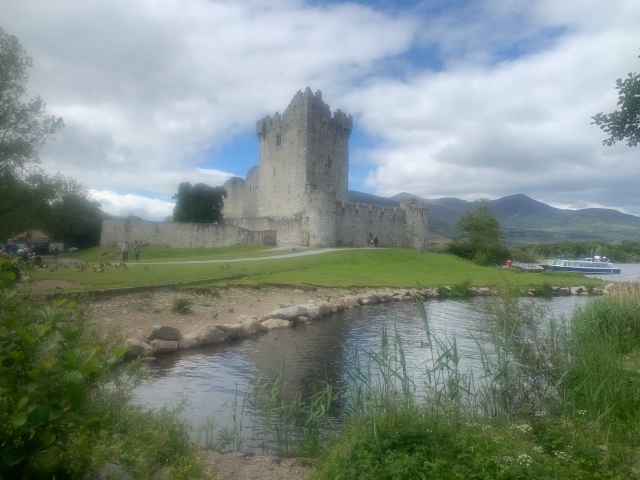 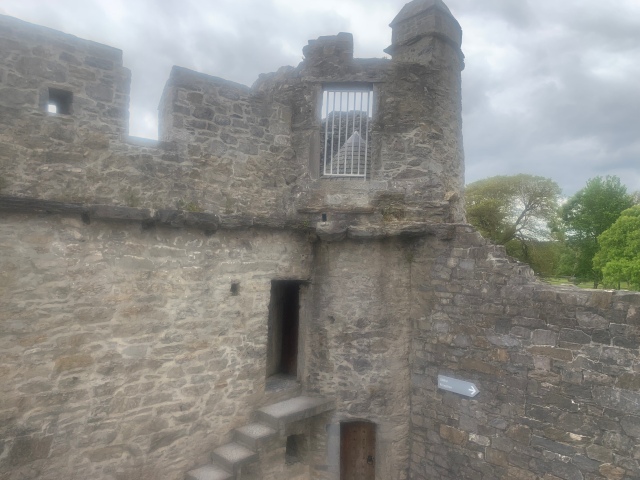 Our first stop was Ross Castle, a tower house built in the mid 1400s. We signed in with our Heritage cards, finding we had to wait just under an hour for a tour. We decided that we could wander around a bit, then sit and eat our lunch white we waited. We found a nice bench, having a passle of ducks keeping us company. 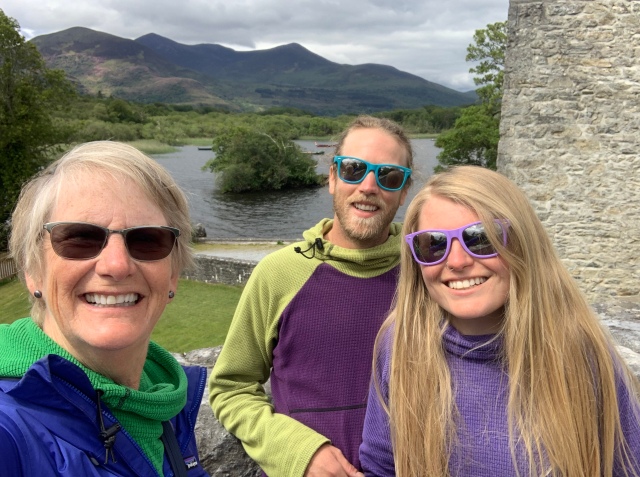 Our tour guide called us to begin, with our small group gathering round. It was a good thing to limit the tour size – the tower rooms were not large-scale the spiral staircase steep and uneven (to foil intruders) and it made it easier to hear the guide. He provided an excellent representation of what living in the castle must have been like. We thought it was one of the best tours of the trip. 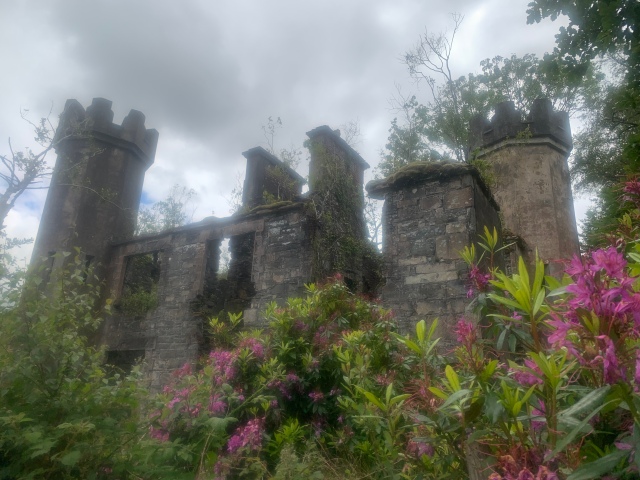 Upon finishing we proceeded to drive through Killarney National Park, which was the start of the Ring of Kerry road. It was gorgeous driving past Lough Leane and then Muckross Lake on roads covered with tree canopies. The mountains reminded us of those near Glenveagh National Park in Donegal. We paused at a number of spots, including one where we saw the remains of an old castle. It is rather amazing how many times you pass such places here, but our Ross Castle guide had told us that about 3,500 such places had once been built on Ireland. 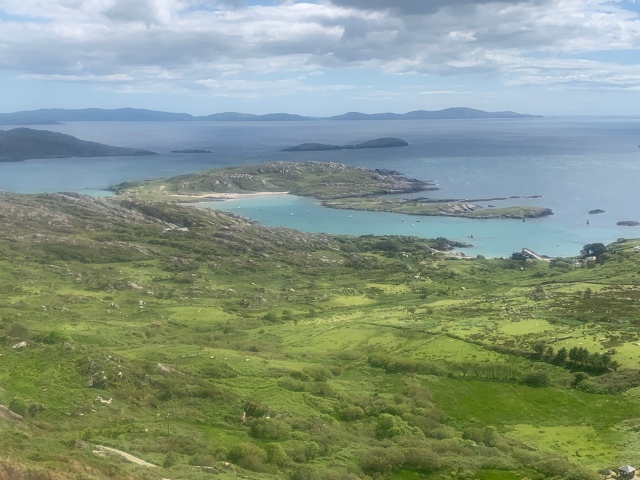 We exited the park and continued on the Ring road. One amazing vista after another. We had met other tourists up north who suggested that we drive the road clockwise to avoid being behind the tour buses which all go the other way. Good advice except then we met them head on and they took up more than their fair share of the narrow road. A few close calls, but Kevin, who fortunately was once again driving, managed to avoid.

We stopped in the small coastal town of Waterville for coffee, tea and scones, sitting outside to enjoy the unusual sunshine. The proprietor came out and sat at the next table to enjoy some of his own wares and proceeded to chat. He commented when he saw Mandy putting sunscreen on her face, not something we’ve had to do often here. He told us it was frequently more sunny with less rain there than many other nearby locations. Told us “Dirt works as well as that sun cream…. You don’t see sun burnt worms, do ye?”” 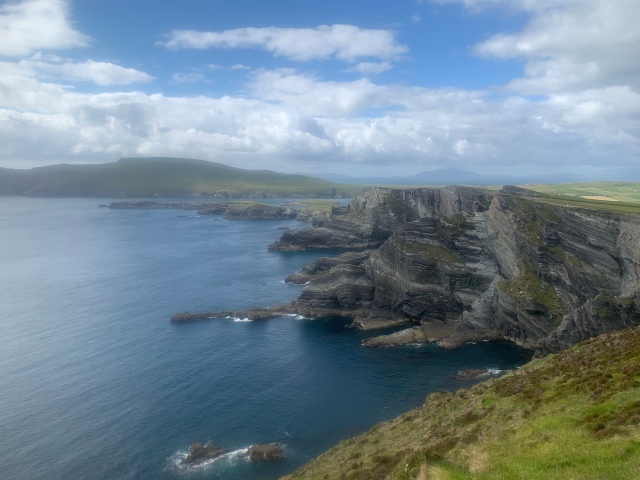 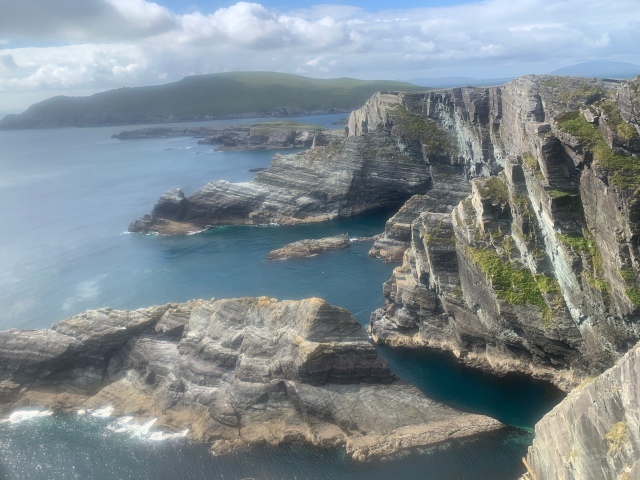 Driving on we ventured off the Ring road to go further out along the coast. Crazy roads later we came upon a gravel drive to park. We walked up and found the Kerry Cliffs. They were stunning! The wind whipped around us fiercely, but we continued to gawk at each lookout spot. We’ve seen some amazing cliffs in the country but these were some of the best, in my opinion. 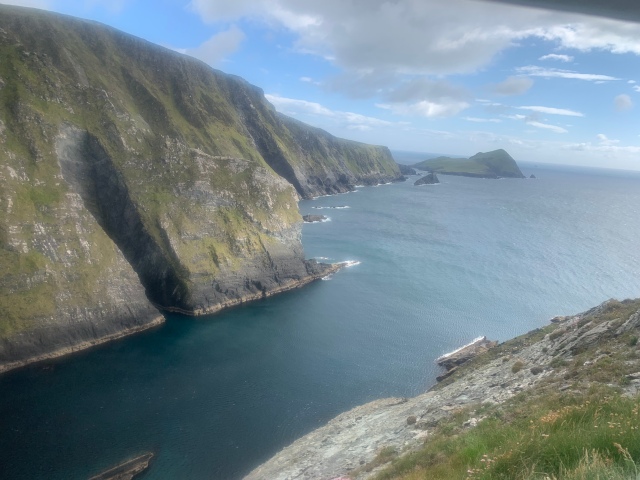 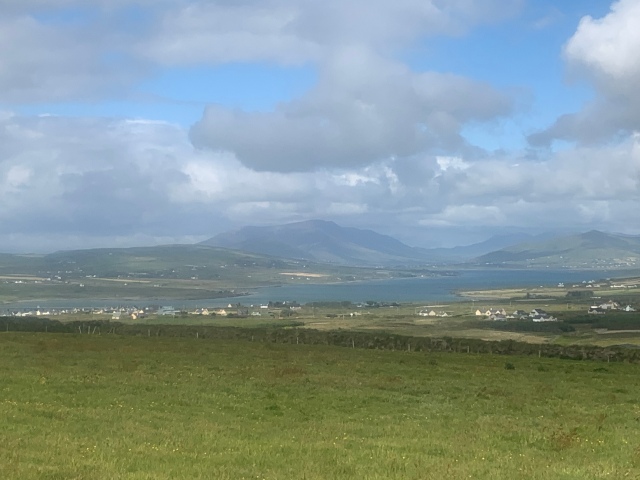 We reluctantly left the beauty of the cliffs and continued on the remainder of the ring road heading back to Killarney for dinner. Mandy found a Thai restaurant online that had good reviews and it happily lived up to them. We had a delicious dinner, then drove “home” to Limerick. It was grand to be met by our friends to share the stories of our day.