We woke, fixed an easy breakfast, a few sandwiches and took off south for Cork. We drove on the motorway, which was fairly unusual for us here, as we’ve tended to stay on the small, more country roads. Blarney was along the way, not far from Cork so I asked to stop so I could see it. I had no desire to kiss the Blarney Stone, just to glimpse the castle. We found parking easily and walked up to the entry. We felt it was unduly expensive so opted to leave. We went to the pay machine for the parking and found we didn’t have to pay for the short time. But there was an Irish woman there who was trying to figure out the machine and was befuddled when she realized that it only took coins, which she didn’t have. I had them and didn’t need them. I handed them over to her for her to use. She didn’t want to accept at first. Then I told her that I had just been in New Zealand in the same circumstance and a wonderful Swiss couple gave me the coins I needed. She took them, asking if I was American. When I said yes, she told me she had a son in Omaha and had also been in Seattle recently tending a baby for a month. Small world. 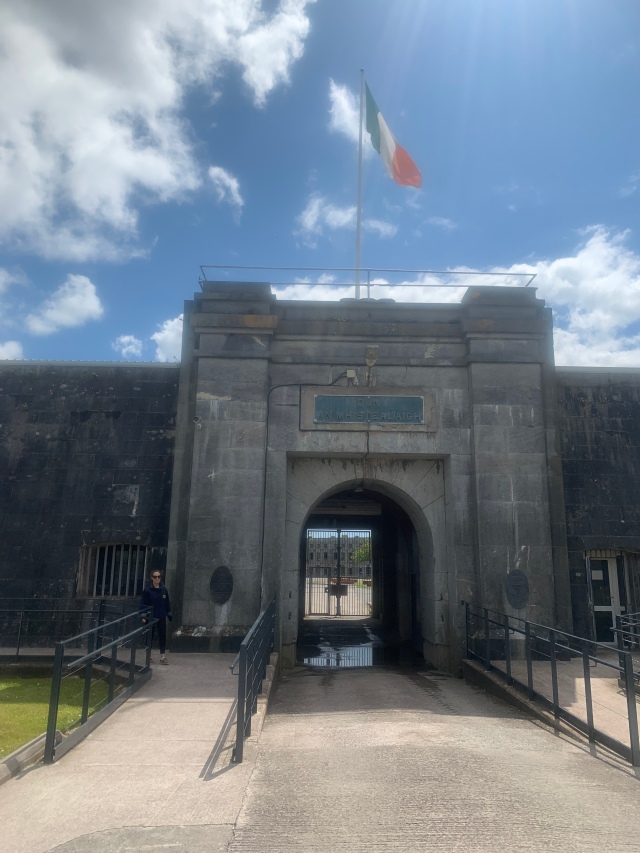 We thought we might see a bit of the castle by driving around it, but no. So we drove on. We were heading to Spike Island, which Tony recommended. It was an island in the Cork harbor that was originally a military fort and then became a prison. We took a boat out to the island where a guide led us around for the first hour. He was most informative – what a fascinating history it has had. We then spent the next few hours exploring on our own, poking our heads into old cells, walking through tunnel-like passages to reach battlements. It gave us great views across the water at the town of Cobn, previously know as Queenstown. 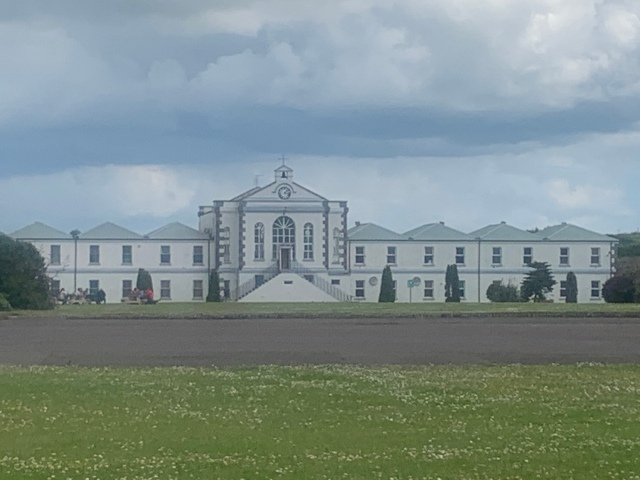 Once back on the mainland the kids were hungry so we stopped in a little cafe for a small meal. Our timing couldn’t have been better – the weather had been lovely while touring the island but we had no sooner sat down at the restaurant than it began pouring. It lasted while we ate, then amazingly stopped as we finished and walked back to our car.

By that time we needed to scoot back to Limerick for the evening’s plans. The one time when we actually had a place to go at a particular time we had nothing but tractors and pokey drivers. We made it back to the house in the nick of time and quickly switched from our car into Stephanie’s.

Mandy had decided that we ought to participate in an evening of escapism… Namely an escape room. She had found one here in Limerick so all of us, plus Colm, Tony and Stephanie’s son, all went to solve the case of the Troubled Waters. Our situation was that we were at sea beset on by pirates, with the boat sinking and we had to solve the puzzles to get out. All within one hour. We worked together well managing to get out of the first room only to have to solve the puzzles in a second one. With persistence we managed to solve it all to get out with 20 seconds remaining!

After that excitement we went out for pizzas and beer. Another fun day!