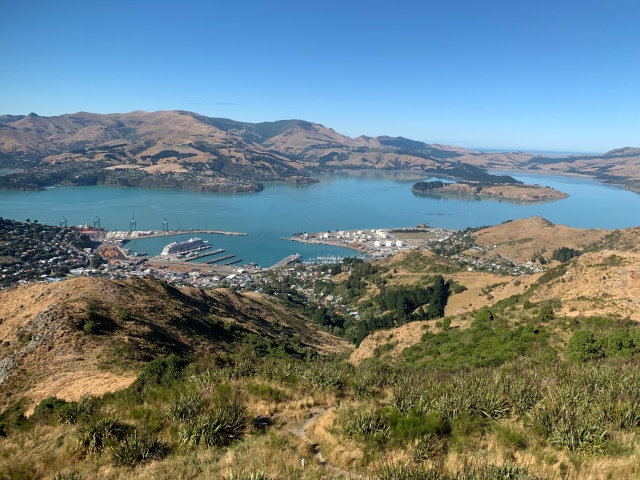 We woke this morning to our hosts coming in from a morning walk with their friend, Alex, another rather amusing gent. Said he was fluent in three languages…. English, Swedish and Rubbish. Ha! He was spot on. We were treated to a delicious breakfast including homemade yogurt and toast and croissants with homemade jam. And fresh coffee!! Woohoo! 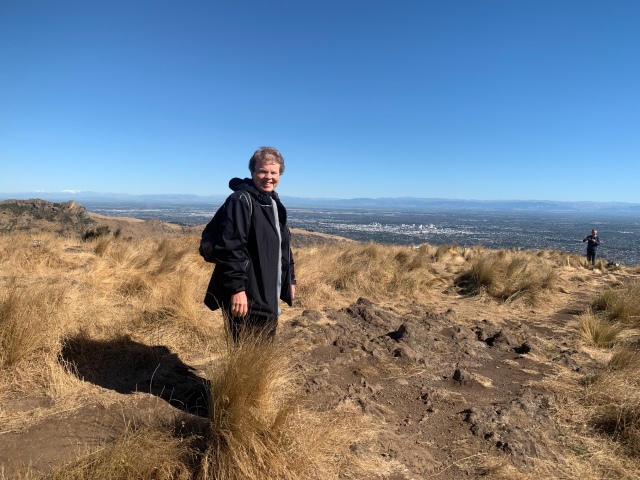 After chatting, exchanging travel stories and advice about how to spend our day we were off and about. We began by driving the short distance to the Christchurch gondola. Unlike Queenstown we found easy parking and no lines. We chose to get a package deal covering the gondola, the city tram, boat punting and the botanic gardens. We began by climbing into the gondola and riding up to the top of Cavendish Bluff. It gave us a striking view of the city and harbor. We were able to walk out onto the edge of the Bluff for a better view. After walking all around we went to the lower level where we rode a short “time travel” ride going over the development of New Zealand. More for children but still informative for all.

We then managed to drive into the center of the city and found a parking lot to leave the car. So much for the easy part. As we pulled up another car did the same and a woman got out to read the sign. We asked if she knew the routine. Nope. So we figured we’d learn together. Over to the pay machine. Unfortunately our credit and debit cards did not work and the only cash it took was coins. Well, silly me, I’ve continuously tried to lighten my load by using them. We needed $10 NZ and only had $9. But karma was on our side as the other woman was a sweetheart from Switzerland who gave us the dollar coin! The machine was rather touchy making you push in one coin then wait before another could be put in. I told the woman we wouldn’t be experiencing that if the machine had been made in Switzerland.

After that effort we easily found the first tram stop and began a gentle ride around the city center in a vintage 1934 tram with a fun driver/guide. After a few stops we got off at Cathedral Square as it was “food truck Friday” and that sounded like a great lunch option. We checked out all the “trucks” which were mostly small, cute trailers. While walking around we looked up and spotted Gandalf! No kidding! There was the grizzled old wizard complete with his wood staff. I sidled up to him to ask what he was up to…. He told me he was staying away from the government and only supporting the “arts”. Hmmmm…i decided it was best to allow him to wander on so I went for lunch. I opted for falafel “donuts” and Chinese veg bun. Delicious. We saw the devastation of the 2011 earthquake in stark reality at the cathedral. I’m glad I was able to see it and the rest of the city in 2007. But they are doing a remarkable job of rebuilding with the earthquakes in the forefront of how they are handling things. 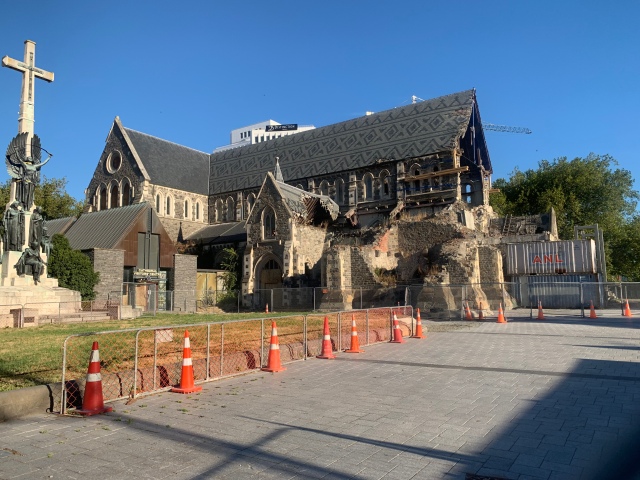 We hopped back on the tram and headed for the Avon River which snakes through the city. We went to the boat shed where we boarded a punt to glide down the river a bit then turn around to come back. Think of it as the opposite of an adrenaline rush. So peaceful and calm and just serene. It was over way too soon. 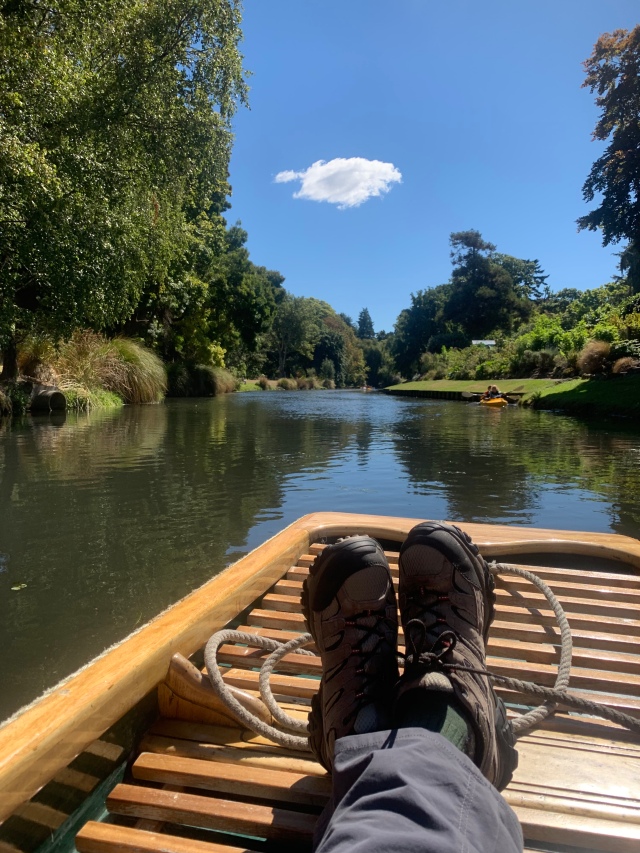 From there we walked to the front of the botanic gardens where we got on a small tour cart. A very knowledge driver slowly drove round telling us about all the trees and beds, plus we got to stop for a quick look around the conservatory, with a rain forest like room, one of mostly begonias, one with cacti and a small orchids room as well as the rose garden. Once we finished and everyone piled out we stayed to chat a bit with the guide. He was most interesting, saying he only did this when he was back in NZ from his overseas work and only then a few times a month. But you could tell he loved it. 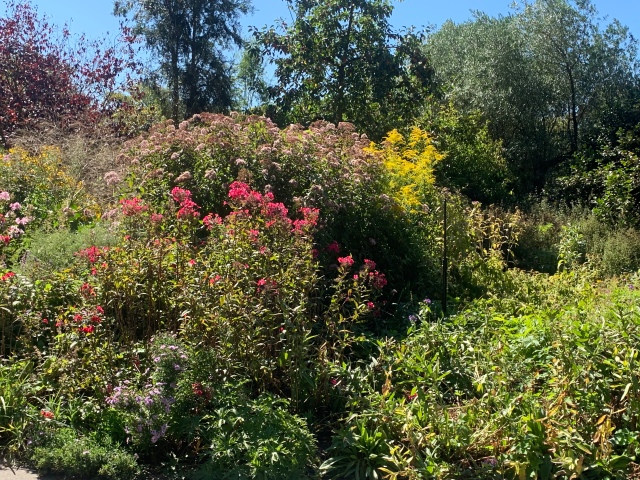 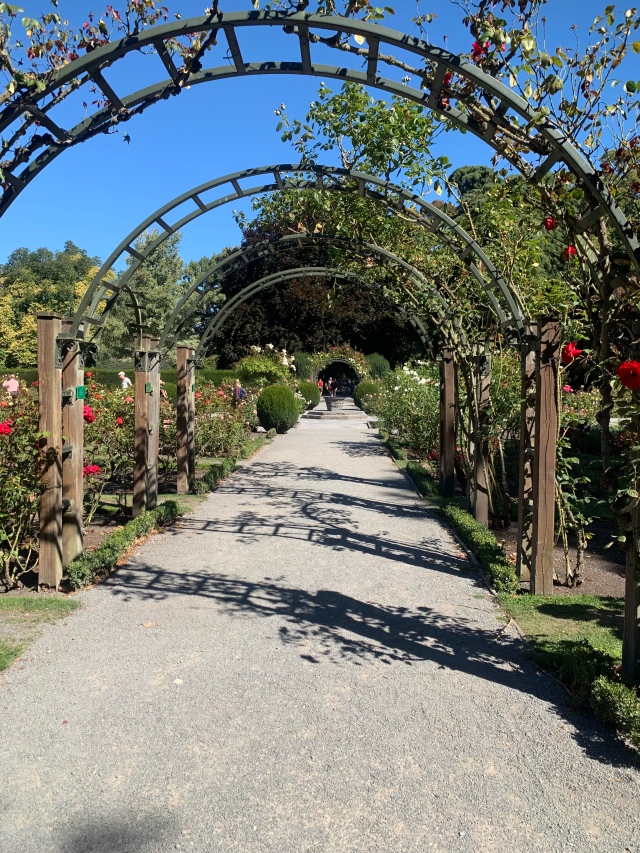 Afterwards we hopped back on the tram, heading for the “All Blacks” shop, where they sell the jerseys for the NZ national rugby team. Apparently one of Dian’s friends wanted one. By then we just meandered back to the cathedral square where the food trucks were all still there, along with street musicians. Very convivial. We chose to get our dinner there, this time I chose a Morrocan Fattah nacho…. Very different and very good.

Further walking took us back to our car park. We were wondering if the nice Swiss couple had returned or not, as we had seen them several times throughout the day as we wandered around. Their car was gone but I found the sweetest note tucked into my car window saying “byby ladies, the Swiss couple”. It doesn’t get cuter than that.

A twenty minute drive through the city and up into the hills brought us back to our hosts’ house where they kindly let us do a load of laundry and gave us tea to settle in for the night.