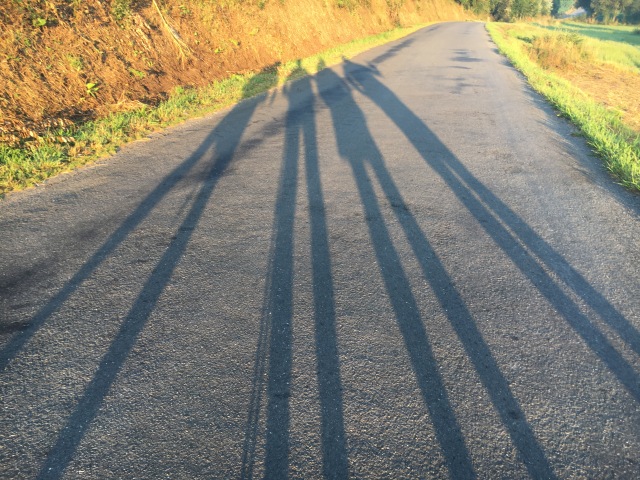 We had a light supper at the albergue where we were staying as that was it for the town. It was directly across from the church, where the bell rang about 1730 for evening mass. The older local women all walked over, all dressed about the same, while the men stayed at the bar, solving whatever issues they thought needed addressing. Eventually the women came over and sat inside to chat while the men remained outside. At some point a nice young man, Conner, from Salt Lake City, came over and said “this bottle of wine came with my dinner and I’m nite going to drink it…. Would you care for it?” Well! He couldn’t have found more welcoming recipients. And we had another Irishman join us – Sean, a retired high school principal whom Tony and Stephanie had met last year on the northern Camino. We have thoroughly enjoyed Spanish wine. And for my wine group friends – you’d be amazed how much red I’ve been drinking. Then off to our bunks we went for an early night, only to be kept awake through the night from some unexplained music with a bass beat that never seemed to quit. 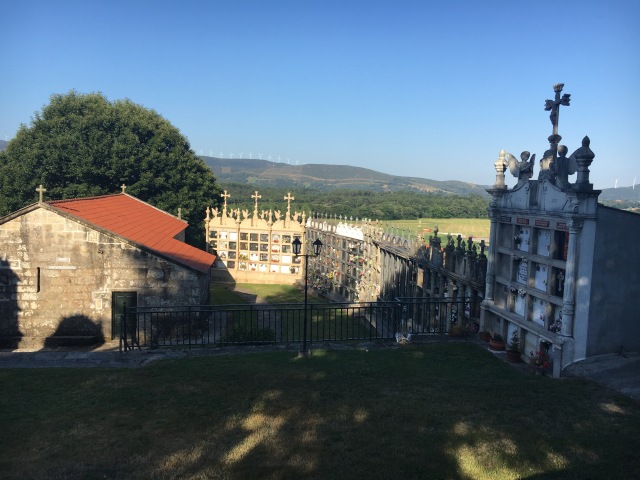 We started out early after a quick cup of coffee at 0700. Knowing it would be a long, hot day helped spur us on. It started out lovely and cool and made for pleasant walking even with it being much on paved roads. By 1030 we had sunscreen on, hats on and thus began the day’s drudgery. This was a tough one. Fort some reason I thought heading out to the coast the land would flatten out. Not so. Our first hint was the windmills on the ridge. Stephanie and I looked at each other and said  “I bet we’re heading  up there.” Sure enough. Several ridges later it got worse. No shade. No wind. Lots of sun and heat. Yikes. Out came my hiking umbrella that at first I thought Mandy was a bit nuts saying we ought to carry. Not so. They have kept us dry in rain and provided marvelous personal “shade”. Luckily we had a few nice rest stops for coffee, lunch and wonderfully cold flavored popcycle type things.

But after 20km and the heat and the slog of the walking, I was beat. It was a”dig deep” day, or as my friend, Tracy, used to say a “suck it up Sally” day. But fortunately I heard Mandy’s “cooee” hiker call and we found her and Tony sitting in the shade at a picnic table. Fabulous! Snacks and drinks and learning that we had about 8 km or so to go with a church and fountain about half way, off we trudged again. As usual, Mandy and Tony were way ahead. Finally, a church was spotted but we didn’t see the fountain until they hollered at us, though Mandy said she put a big arrow in the path. What rejuvenation that fountain brought! I immediately dunked my head under it. Stephanie took off shoes and socks and put her feet under it, we all filed our water bottles and enjoyed the respite. Finally we had to load back up and start off again. But we had renewed vigor which only got more so one we finally crested the last hill and saw the Atlantic ocean – what a marvelous site to behold! We scooted down the final hill, into the coastal city of Cee. Another km or so later we found our albergue.

Tony and Stephanie hurriedly got cleaned up as another hiker they met (from Denmark) last year was here along with his Spanish girlfriend, Raquel, after they had also been hiking another section of Spain. We met up with them while they were noshing on barnacles. Yuck! While we  were all having drinks outside a bar we started to hear a commotion, which turned out to be a religious procession to honor the patron saint of sailors. How apropos! We wandered off for dinner, then down to the waterfront where the local celebration included free bread and sardines, which they were grilling there at the port, with the band which had accompanied the procession, playing. Having just eaten we did not partake. The evening ended with fireworks. 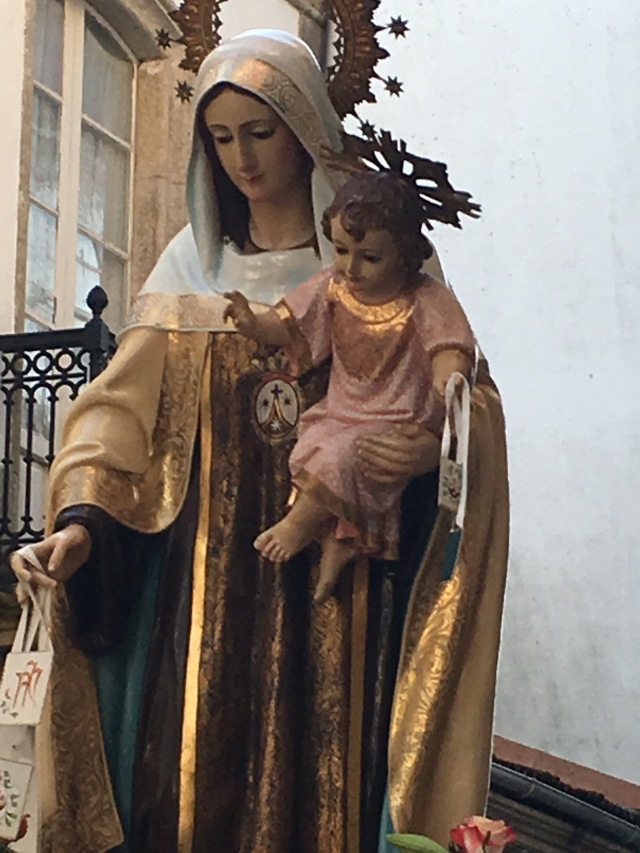