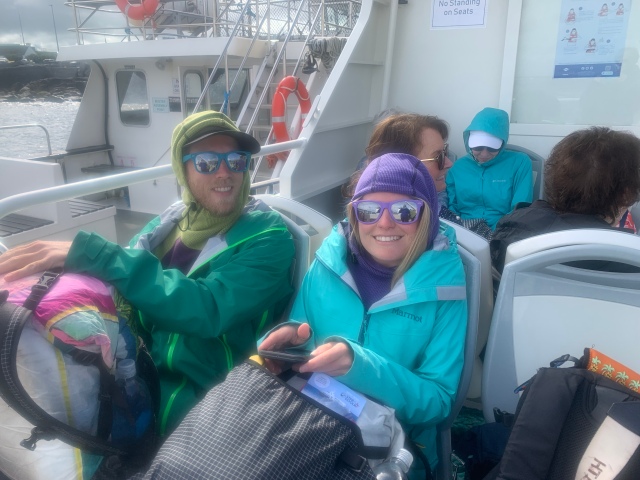 After a noisy night at the hostel, we woke early to get a head start on using the kitchen. Our plan worked as we were the only ones up and cooking. With breakfast done and lunches made we headed off for today’s adventures. 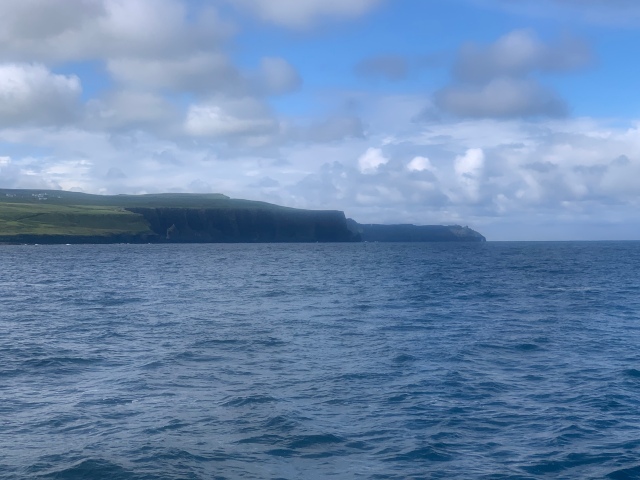 We drove along the coast to a small town called Doolin, where we had booked a ferry to the islands. Luckily we got there early as we were uncertain about parking and we knew we had to finagle our tickets a bit. We had spoken with the ferry company before we booked online, as it was rather confusing. It remained clear as mud, even after reaching the pier. We parked and went up to the ticket office and explained what we wanted to do. The agent sighed a bit but got it all worked out. With paper tickets in hand we hurridly grabbed our packs and got on board. While we had booked the 1100 boat, he got us on the 1000, which gave us more time on our first stop, Inisheer. Sitting at the rear of the boat and facing aft gave us a clear view of the Cliffs of Moher, which we’ll see from the landside tomorrow. 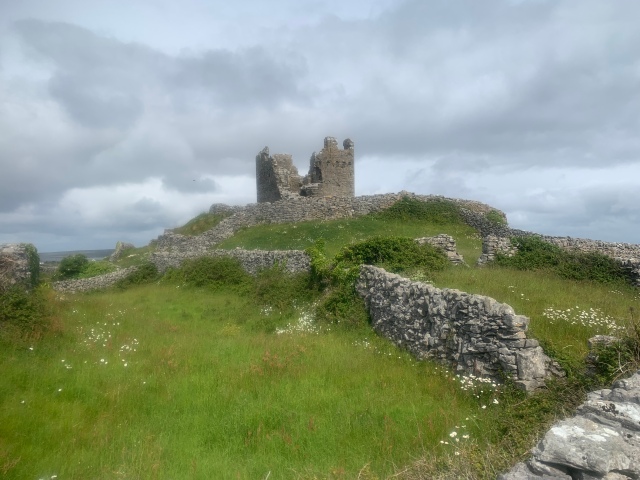 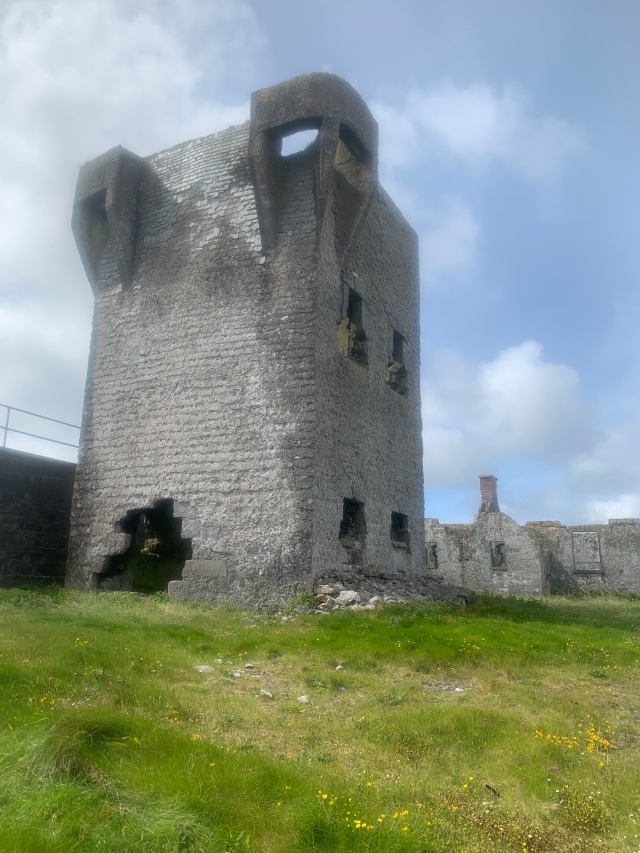 Inisheer is the smallest and nearest of the islands to the mainland. We disembarked to take advantage of the few hours we’d have there. We threw our packs on and began walking. Off and up we went to the high point, which held the remains of a 15th century castle and a 19th century tower. We were amazed to see the massive and many stone fences that surrounded both of them as well as the fields we could see off in the distance. We stopped on the leeward side of the castle to enjoy our lunch. We ended up with unexpected company – a stray cat who seemed intent upon sharing our sandwiches. He kept coming right up next to us and when we moved away it seemed as if he would jump up on us to get the food. 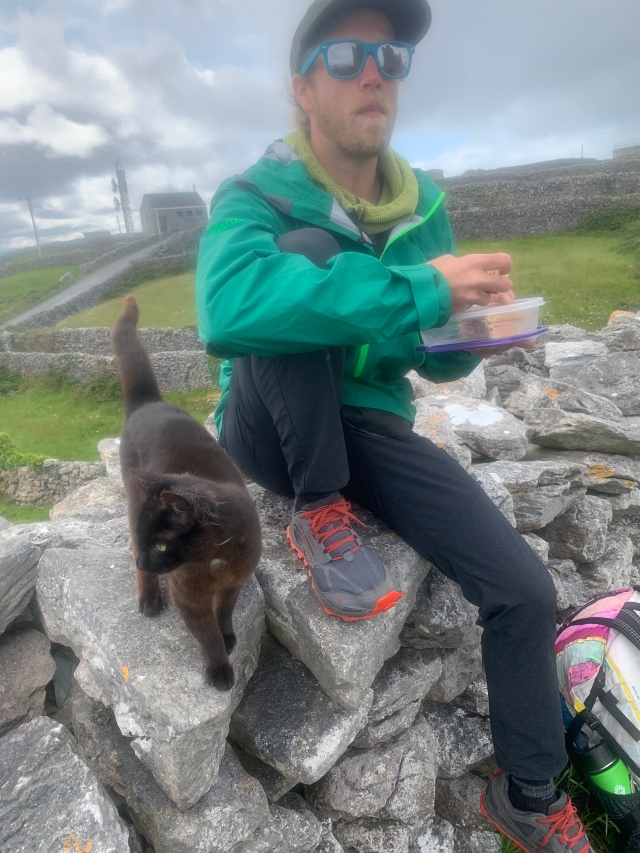 The cat abandoned his efforts as we left the castle grounds and headed back down the hill. Our next stop was a 10th century church and graveyard. At some point the church was found buried deep in the earth and has been excavated enough to see what remains. 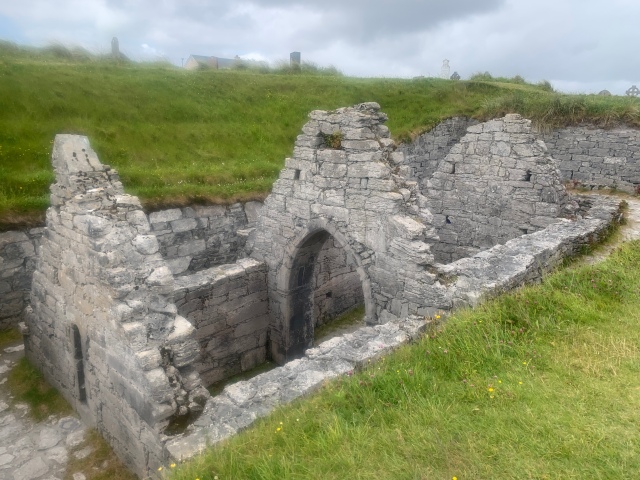 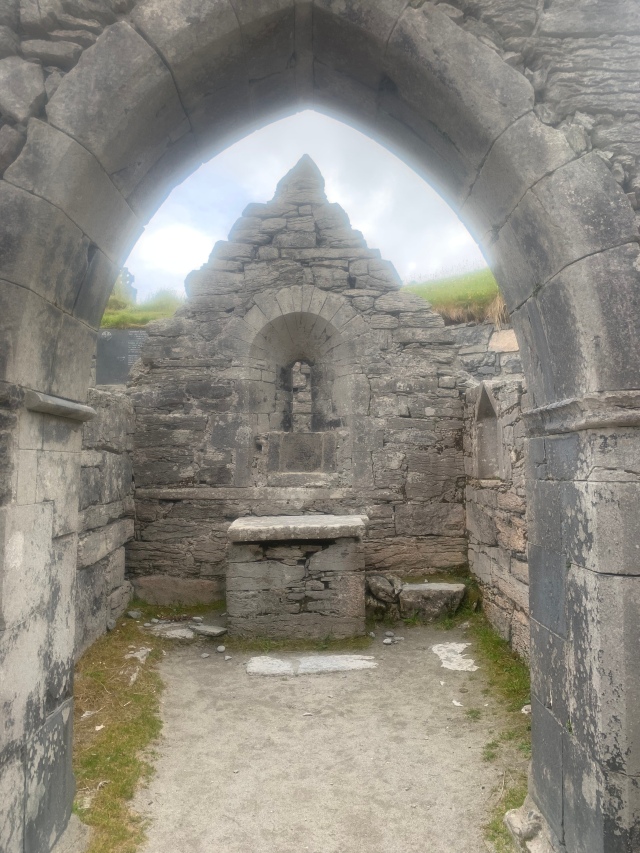 Following our exploration of the grounds we walked back toward the pier by way of the beach. Another beautiful stretch of sand. We found rocks surrounding the beach end covered in barnacles, tiny mussels and limpid shells. 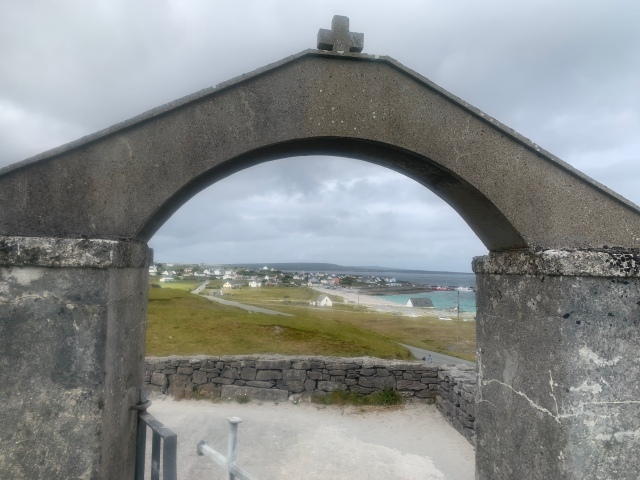 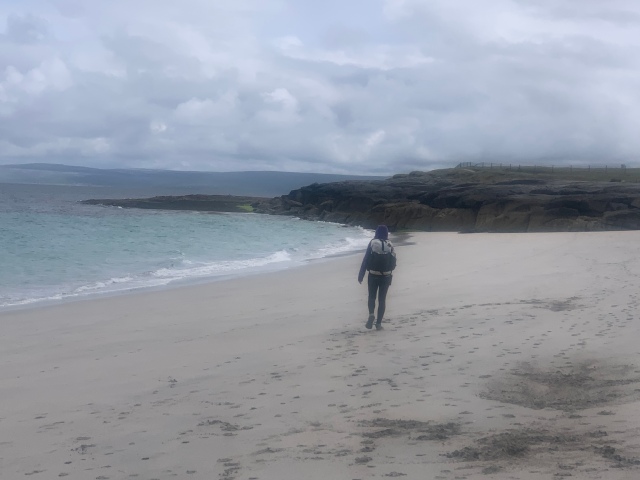 Walking back to the pier we decided we had time for coffee and tea while we waited for our next boat, the Happy Hooker. After much confusion with ferry passengers as to which boat was going where, one small one came in, the few of us loaded quickly and we shoved off, riding the Happy Hooker. We made a brief stop at Inishmaan, before sailing to our next destination, Inishmore. 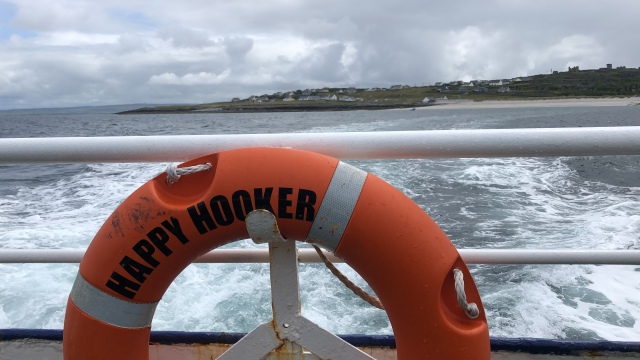 Once we reached the outermost and largest island we quickly disembarked, with Mandy figuring out walking directions to the B and B, Mary Jo’s, that we had booked. We walked up some very narrow streets with crazy drivers, pedestrians and cyclists until finding the place. We checked in, dropped our packs and sat for a quick cup of coffee and tea and a chat with Mary Jo’s daughter, Alison. She clued us in to what to see and do while here. 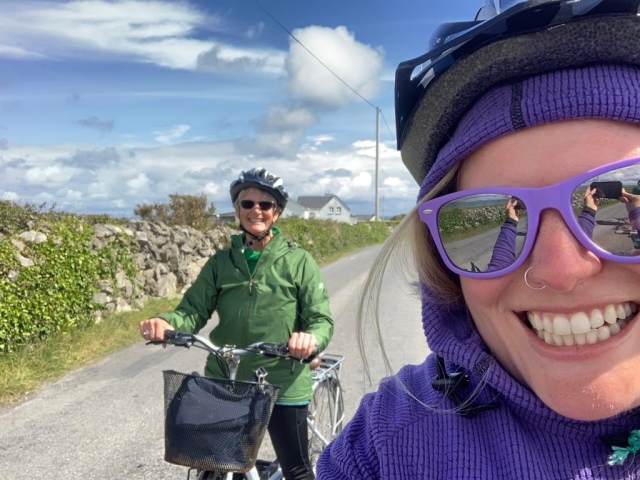 So we went back down to the pier area, rented bikes and rode off on the coast road. I was tired after a lack of sleep from last night but soldiered on. The riding wasn’t bad except for the strong headwind and the odd vehicle passing narrowly by. Our goal was to reach close to the other end of the island, where we were to find Dun Aonghasa. We reached the point where we had to park the bikes then walk about 20 minutes up to reach the ancient site. To our great amusement a local dog decided we were good peeps and adopted us. She followed us the entire time we were out at the ruins. I think she figured that Kevin was a good Alpha, as she consistently walked right at his heels. 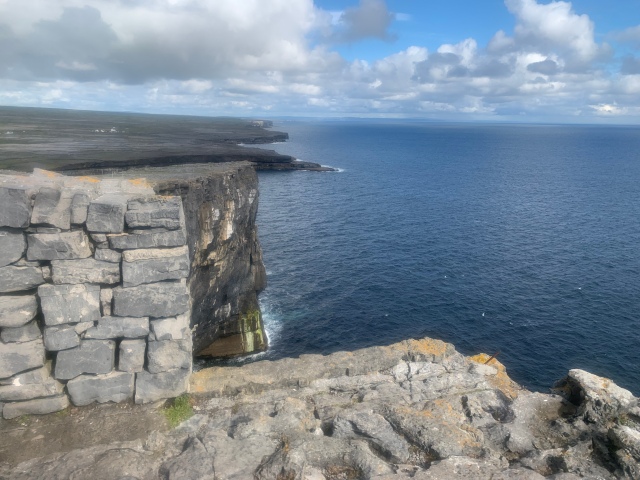 Dun Aonghasa is situated on the highest cliffs on the Aran Islands and is the setting for the oldest stone fort in Western Europe. Built as a semi-circular Celtic fort it consists of multiple rings of stone, of which there is no shortage here. The view of the cliffs was magnificent and even better as we were there at the end of the day with few others, except the dog. 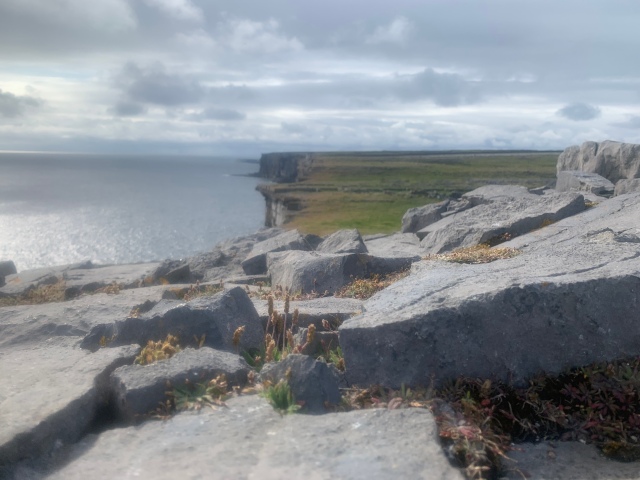 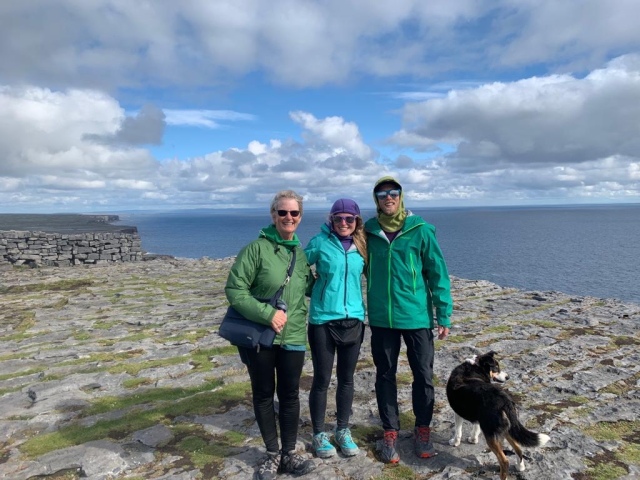 Eventually we left the fort, retrieved our bikes and road back along the high route. A few hills to climb, but the wind was at our backs and we had a different view. 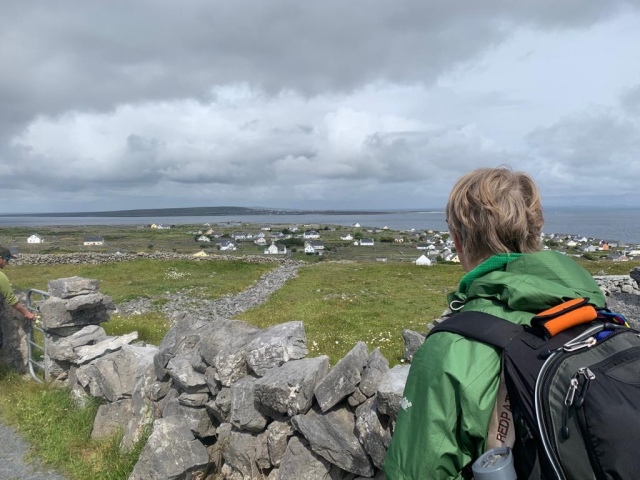 Once back to the accommodation we quickly got ready to head just across the road to the island’s seeming hot spot bar and restaurant. We had a delicious dinner and drinks, sitting next to and chatting with a charming couple from Wisconsin who are touring Ireland for their honeymoon.

One thought on “The Aran Islands with the Happy Hooker”