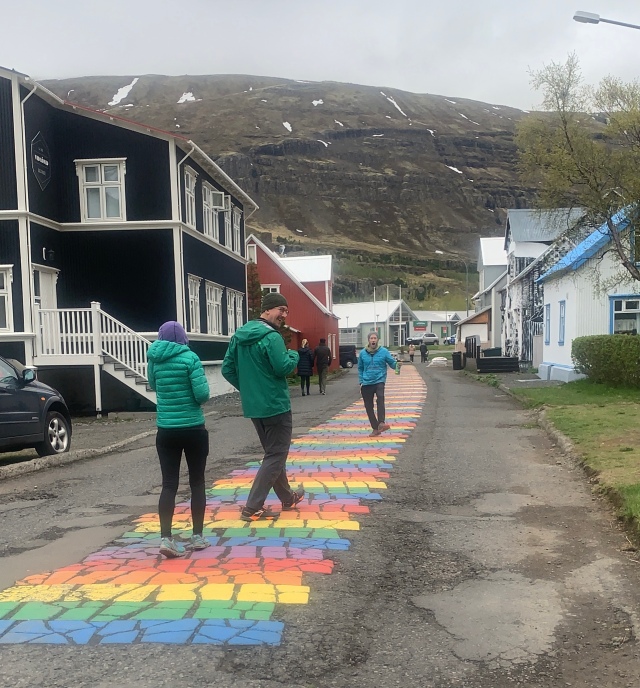 The morning got off to a relative late start as we had stayed up for the kids to watch the show finale. After breakfast we walked around the charming town, surrrounded by mountains and waterfalls and directly on the fjord. This is the port where a ship sails in from the Faeroe Islands, Norway and Denmark. That explains why so many of the camper vans were from Germany. Nothing was open during our walk around but we enjoyed seeing the rainbow walk and all the colorful houses. None are large, but they are well kept and seem quite suited to the place.

Back at the van we made second cups of coffee and headed back over the pass. The nicest thing was that unlike last night when we drove in and it was completely clouded in making it so we could see nothing, today it was clear! We were able to see beautiful waterfalls and mountain vistas.

Our first stop was in the town of Egilsstadir to restock our food supplies. This time we decided to try the Netto store, much to Mandy’s delight. She found multiple kinds of vegan cheese that turned out to be delicious. I got a bit of licorice, like I so enjoyed while living in Denmark, for the others to try, as we found that the Icelanders enjoy it as well. Turned out it was not to the kids’ liking. Kevin spit it out immediately while Crosby gave it more of a fair try but finally also spit it out. I grant that it is extremely strong. The other good tidbit we learned there was that there was a beer and wine store across the street. The kids selected some Icelandic beer and I found a nice bottle of wine. Woohoo!! 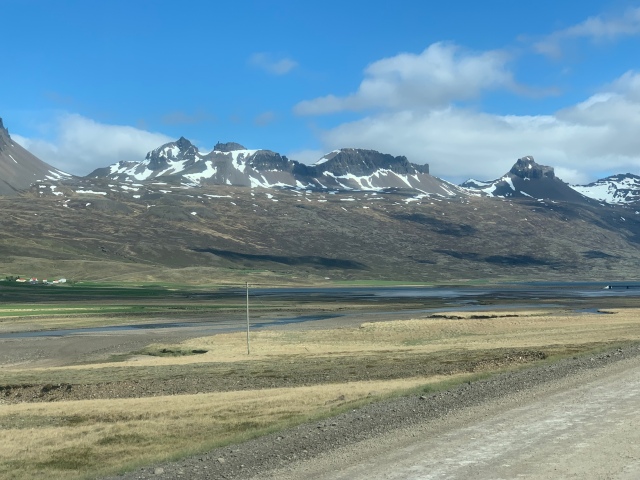 Onward we drove, heading south on the Ring Road which followed the coastline around all the fjords. Happily most of it was paved! There weren’t major things to stop and see, yet around every curve in the road was another gorgeous view. Waterfalls galore (99 today alone!), mountains, the ocean, beaches of black sand and loads of horses and sheep. The Icelandic sheep out number the population here by almost 3 to 1….. 330,000 inhabitants and over 800,000 sheep. They have extra thick wool coats and curving horns. This is lambing season, so we’ve seen many, many little lambs. Apparently it’s common for the ewes to have twins, which is what we’ve witnessed. At one spot today the sheep were close to the road and actually didn’t run away from us as they tend to do. We saw several ewes that appearred to be on the verge of giving birth, but not soon enough for us to see. They were overseen by a ram that we referred to as the Old Man, as he had really huge horns. 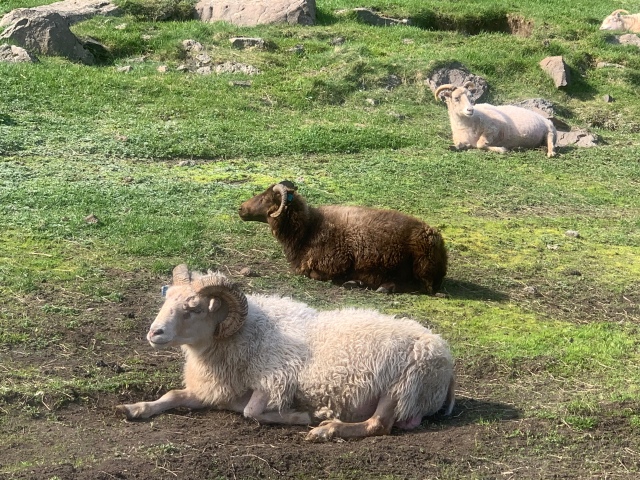 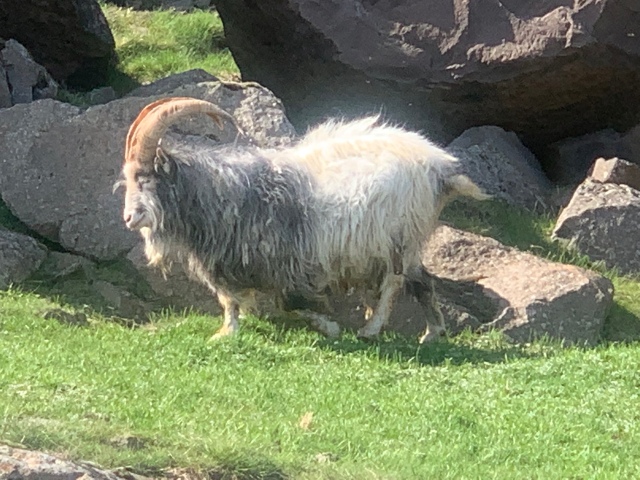 We passed though one town at the base of a fjord, where they tend to settle, and found a local handcrafts shop. Mandy had been wanting a hat knit out of the lopi wool in a design that would remind her of the trip. We happily found one there with sheep knitted into the pattern. 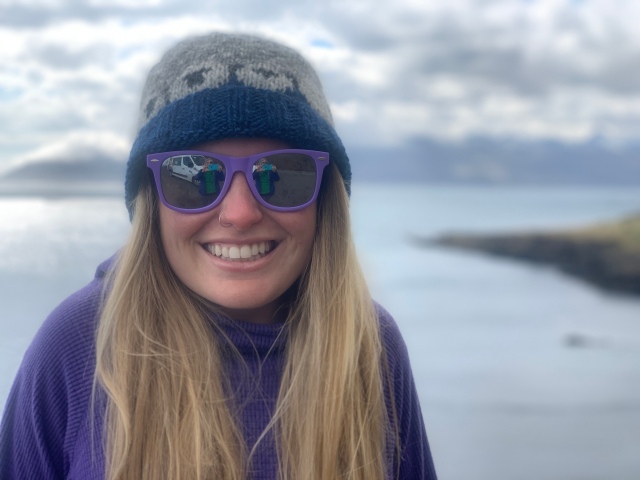 As we were blithely driving along all of a sudden we saw other animals off to the side of the road up against the base of the mountains. Turned out that they are wild reindeer! After that first group we saw a number of other groups as we drove along. Apparently, it never became worthwhile to raise them, so they are only found wild in this part of Iceland. 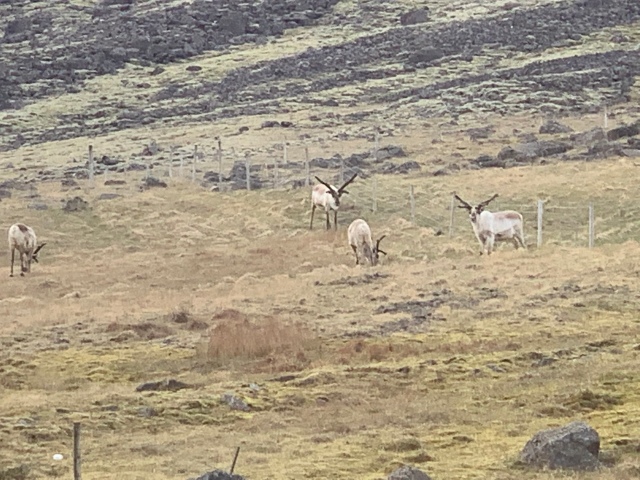 We continued along until we began coming round to more of the South. Eventually we came upon a beach where we wandered out to check it out. What looked like black sand actually turned out to be tons of small, well rounded rocks. We walked across the rock dunes to the ocean’s edge, finding some pretty colored rocks and a number of agates. We ended by having a rock skipping challenge in the inner water way with the many flat rocks that covered the ground. Kevin was the undisputed rock skipping king. 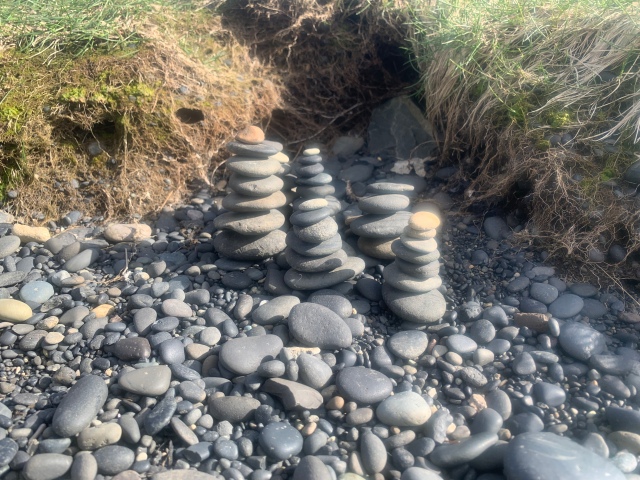 From there we drove on to the town of Hofn, where we found a camping site out by the water. We opted for an early evening so we can hopefully have an early start in the morning.

4 thoughts on “The Southeast Fjords”