The kids said I needed to title this post thusly and you Game of Thrones fans would understand. Me? I’m oblivious.

This was an adventurous day! I know I had said we were taking the ring road around the country, but today we were only on it for about two minutes. Instead we took all kinds of small roads off the beaten path, with many of them dirt roads, plus we went over four passes. But more about that in a bit. 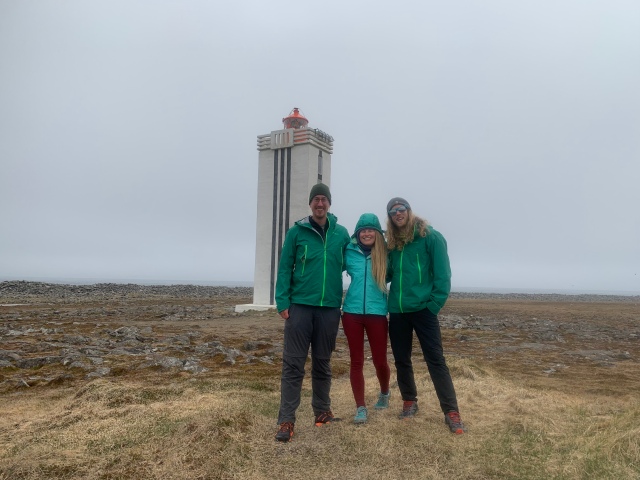 We took off from our camp site, heading north toward the most northern spot in Iceland which lies a mere 3 km from the Artic Circle, on the Greenland Sea. It was quite a remote area which somewhat resembled a moonscape. Enough so that we paused at the side of the road so the kids could do a slow motion video resembling a moon walk. Never a dull moment with these kids! We continued on until we saw a sign for Hraunhafnartangi and pulled Kuku off the road. We proceeded on foot across about a mile and a half of rocky terrain following the coastline to reach the lighthouse at the furthest point. We were amused to discover a make shift shelter at the edge of the beach. Looked like something someone on “Naked and Afraid” would be thrilled to find or build. 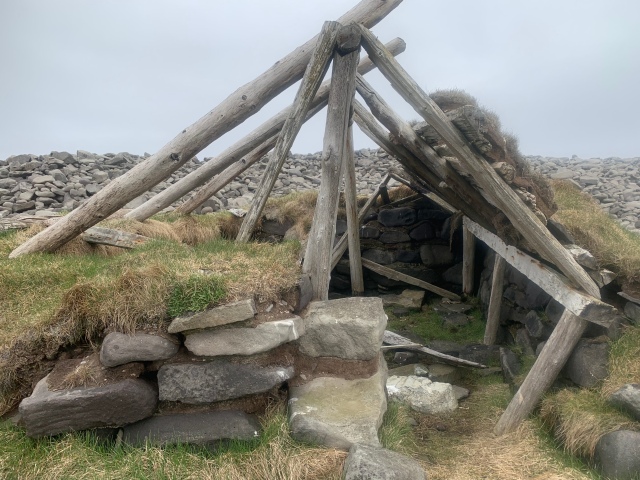 Once we walked back to the van we proceeded on toward the town of Raufarhofn, where they were supposedly building an “Artic-Henge”, which we wanted to check out, plus where we thought we’d find coffee. Along the way we spotted an elf! We’ve been listening to pod casts about them so have been on the alert. This one seemed friendly. 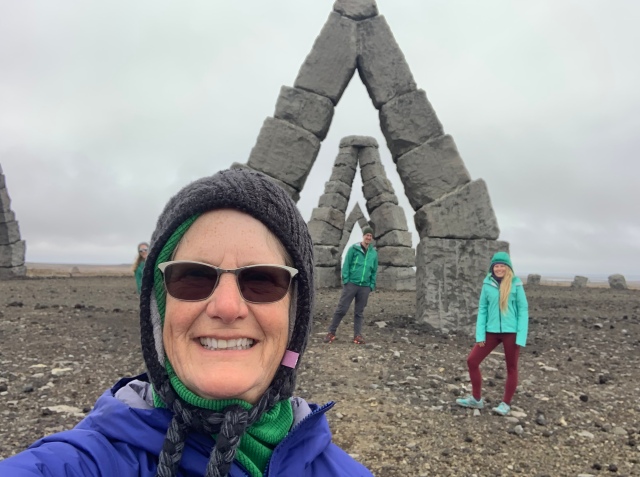 The Icelandic circle is already an amazing thing and it’s only just begun. They already have the center arch and the four side arches, which ought to let in the light at the soltices and equinoxes. We enjoyed wandering around.

We proceeded to the small town and found a charming looking cafe/gift shop and promptly got coffee. I wandered across the street to see the figure seated there. A charming fellow looking out to sea. We found a gas station next door so took the opportunity to put some air in Kuku’s tires and got back on the road.

This time we were planning to drive out to Borgarfjordur Eystri to see puffins, one of the things I really wished to do on this trip. We had driven about 45 minutes when by chance I looked at my phone and saw an email from the Kuku folks. The message said they had received a call from a shop saying we had left a purse there. I was rather confused at first until we looked around the van and realized my purse wasn’t with us! Yikes! It had my passport, money, credit cards, everything! We quickly turned around, drove back to the shop, where I ran in and found the woman who had served us. She brought out my bag completely in tact, apologizing that she’d had to open it to find out how to reach me. I gave her several big hugs and my profuse thanks. With that we drove on to our destination.

Along the way we stopped when we saw a group of Icelandic horses near the fence along the road. I’d been looking for a chance for a good photo, as there had been horses everywhere we’ve been, along with all the sheep. Kevin went over to the fence and somehow sweet talked them into coming over for a close up visit and a bit of patting. They are gorgeous animals.

But what a drive it turned out to be! Not just more dirt roads, of which there were plenty, but we had to cross over a rediculous mountain pass. The road was crazy narrow, with switchback after switchback and to make matters worse we soon were enveloped in clouds and fog. The only thing showing us the edges of the road were these yellow posts. Not a guard rail in sight. But lots of snow off to the sides {fortunately none on the road}. Egads! It was making me nuts, but eventually we reached the top and headed downwards. 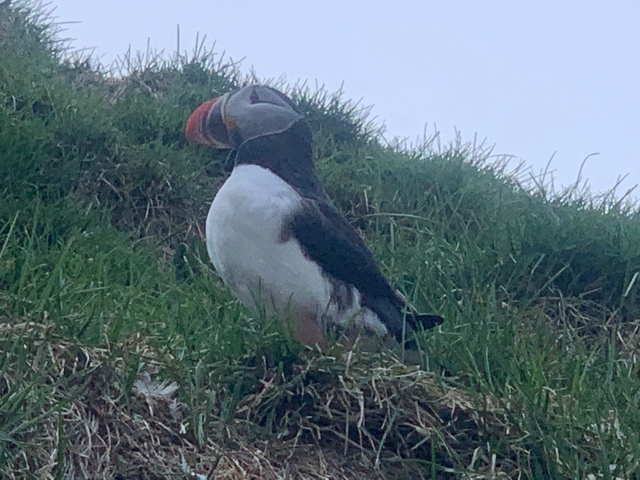 The drive continued along the length of a narrow estuary, then back up the other side of it to yet another mountain pass, on which construction was being done. Oh, my! But we finally came to the end of the road where there were massive cliffs with thousands of nesting birds, including puffins! They are simply the cutest looking things with their orange beaks and feet. They return here from sea to meet back up with their mate in their hillside burrows. While we patiently waited and watched a few would waddle out of the indiviual burrows, look around, sometimes flap their wings, then just as soon turn around and disappear back into their burrow. Charming! And worth the crazy drive. 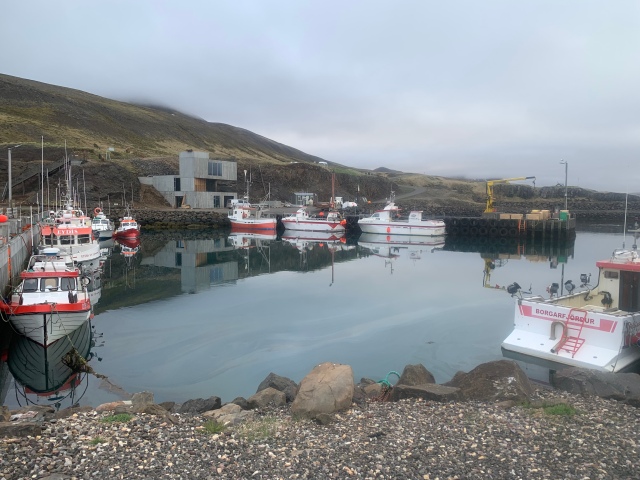 By then it was already getting late and we had to retrace our way over that previous pass. This time I got wise and just stuck my head in a book so I didn’t see where we were. We drove on to our campsite destination for tonight, the town of Seydisfjordur, which we’ve taken to call Sey-town, as we can’t pronounce it. We pretty much haven’t been able to pronounce any of the Icelandic names, so we just slur over them. Works for us. But of course the day wasn’t complete without yet another fogged in pass to drive over to get there. Turned out to be the busiest camp site we’ve used….we had gotten comfortable being almost alone.

And now after we cooked dinner the kids are finally able to sit and watch the final episode of Game of Thrones on one of their phones. Me? I’m sitting up front with my noise cancelling head phones writing this and doing my best to ignore the show!