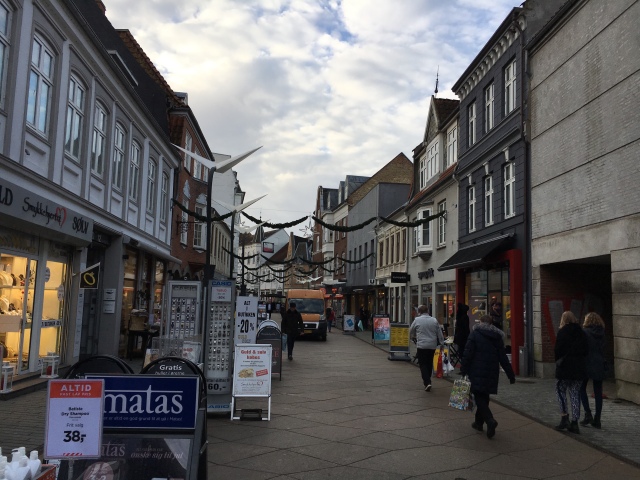 A restless night where jet lag must have caught up with me, as I woke at 4 a.m. There was no going back to sleep. Ah, well, I finally gave up and went up to join Steen for breakfast. Afterwards we decided to head into town to walk along the city’s “gå gade” – walking street, where no cars are allowed. We looked into a number of shops just to enjoy looking at the decorations and see all the holiday shoppers. It was quite delightful as at least for the beginning there was lovely sunshine, though it was quite cold. But no snow. Steen had us pose by this statue along the way thinking it was quite amusing.

We headed back to the house for a late lunch and for me to have time to pack up my backpack for the two day jaunt into Copenhagen. Steen drove me to the train station and walked me up to find the correct train. We had a bit of a discussion as he thought it was track 3 and I believed it was 4. I had booked these tickets while at home so had the printed ticket with the train number and reserved seat. The confusion was due to the fact that they had two trains just 4 minutes apart heading the same way. We got it figured out ( I was correct!) And I proceeded to board right on time. They certainly know how to run a railroad here. But it was a good thing understood Danish as all the announcements were only in that. I got off the train at the Høje Tåstrup station and was happily met by Birgitte, Henrik’s sister. We drove over to her mom, Inger’s, new apartment where much of the family gathered for a wonderfully lively evening. Susanne, Henrik’s other sister, cooked the most delicious salmon and creamed leeks dinner. Four of Inger’s grandchildren joined us, all teenagers, yakking up a storm. I couldn’t begin to keep up with all the conversations, but reveled in the family conviviality. They had set a beautiful table with Christmas dishes, with candles lighting the shortest and darkest day of the year. Exactly what the Danes mean by it being “hyggelig”. 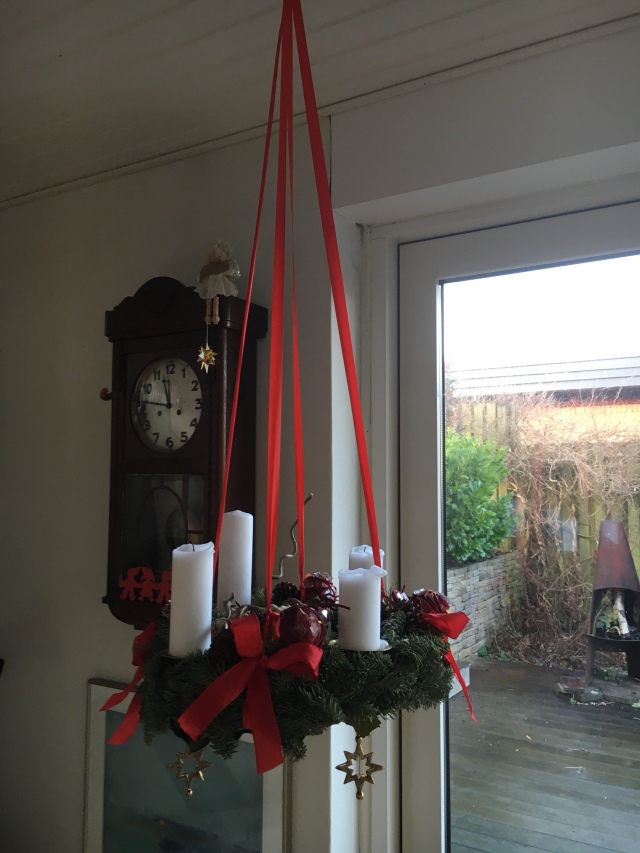 After coffee and desert we cleared up and Birgitte drove us to her house, not far away. It’s a totally charming house that they have decorated for the holiday. Birgitte, her husband Michael and I sat up gabbing for quite singe tinge before finally retiring for the night.