We woke up to our last morning safari, with yawns over coffee. This was to be our tenth such outing since arriving and it didn’t get old. Every time out there was something unexpected, something amazing. We didn’t have anything in particular in mind to look for, so we were happy to have Leonard and Hector take the lead.

We pulled away from the lodge with the weather a bit cooler than we expected, considering how hot it got yesterday and remained so last night. Bundled with our blankets we started scanning the area as they drove. We spotted a solitary giraffe quite soon. They tended to be by themselves or at most with one or two others.  Passing by a watering hole we saw some Egyptian geese. Leonard informed us that they originally used to migrate but now they remain.

On we drove until we spotted another safari vehicle stopped, which usually meant there was something to see. Sure enough, there was a herd of elephants – all females with lots of little ones, one in particular that had been recently born. We paused, amused as always by their actions. They truly are they most entertaining of creatures. As we inched along we were surprised to find some cape buffalo grazing just behind the herd of elephants. Incredible. 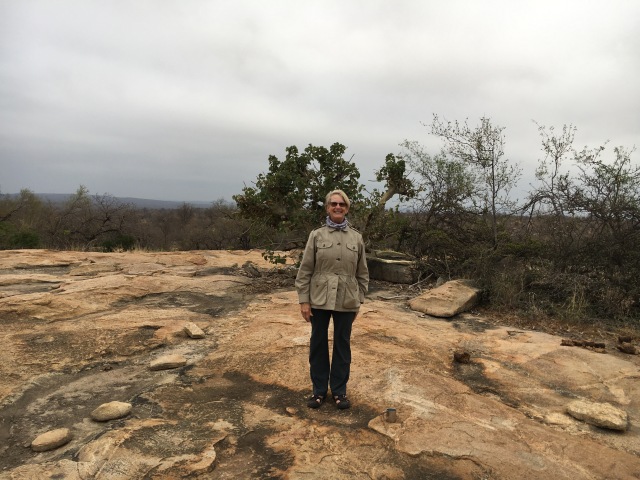 The morning drive then had us pass more of the elusive warthogs, which scurried off as soon as we came around. Off in the  distance we saw a breasted snake eagle high up in a tree.

And then we came upon the most incredible sight – five bull elephants, with four of them squaring off with each other in twos. Brian remarked “Is it the semi-finals?” Each pair stood facing his opponent, not moving. Then, without warning, one would advance and a tussle would commence. Each pair went at it multiple times. They also switched opponents. We presumed they were fighting over the pecking order with the dominant male being the one standing off, not engaging. Finally they seemed to come to an impass, and just began eating the bushes. One came over right next to the rover and stood there. He proceeded to extend his dick just as far as the one the day before, looking like a fifth leg! And what did he do? Of course, he let loose a huge stream of pee followed by a big poop. So much for being hospitable to visitors. Ha!

And then it was back to the lodge for our final breakfast on the patio and packing up for our ride back to the Hoedspruitt airport.  We said our goodbyes to Knox and Hector, our fabulous host and tracker. As we drove out we saw giraffe after giraffe. We finally came to a paved road, which seemed to be a bit discordant for the place after being only on dirt tracks for so long. Our driver asked if we wanted to stop briefly at a local market for last minute souvenirs. Well. Of  course we did. Several hundred rand later we crammed our new purchases into our back packs and climbed back into the waiting van. Not long after we arrived at the airport. It’s a small one but it was hectic with several outgoing flights at the same time. We boarded our flight then had to wait an extra 20 minutes to be cleared for takeoff. The flight, our 6th on this journey, was quick and uneventful. Back at the Johannesburg airport our challenge was to find the hotel shuttle. We’ve gotten a bit spoiled having a driver meet us everywhere. Eventually we found it waiting and ready to take us the few minutes to the hotel for our overnight stay prior to flying up to Zimbabwe.

We got checked in, settled into the room and went down to the lobby where we had been told we’d find a welcome reception complete with wine. We were good with that! But when we got there we found only a table with empty wine glasses, no wine and no one else seeming to be missing anything. Hmmmm. Lucky for us the kind bell hop who had assisted us as we arrived popped up along with the hotel manager. Both were most apologetic that due to a huge conference they had there they weren’t doing the wine reception. Oh, pooh. But wait! The manager said he bring us wine! And the bell hop led us to seats in the bar area, next to a South African woman. She kindly said she didn’t mind us joining her at all. How wonderful! Because it turned out to be the most delightful of conversations over two bottles of wine that were brought and left for us. Life is certainly good! Turned out that she was a psychology professor who had studied at UMass. Finally we bid her farewell and went into dinner and then up to our room to crash as we were all tired. 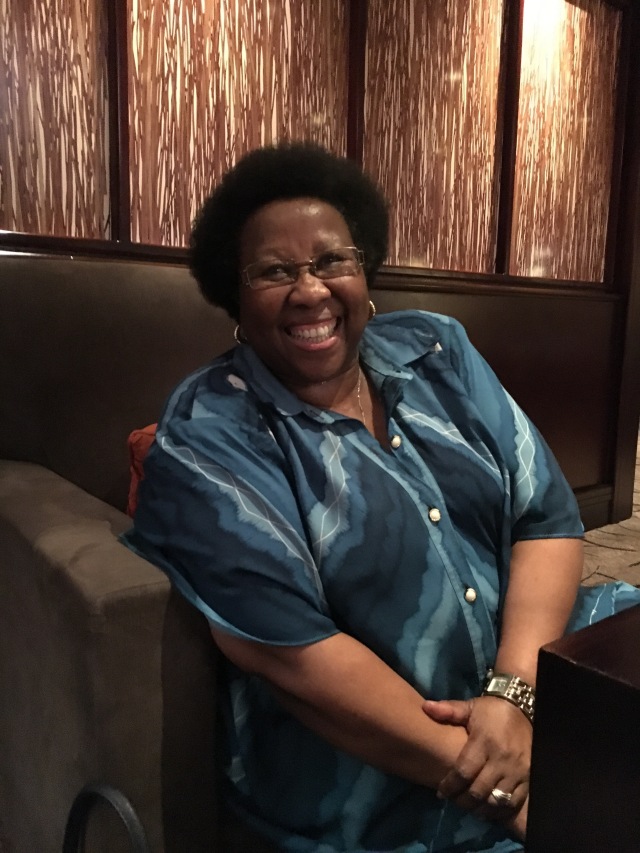 Up in the morning, but a bit later than our recent 0500 wake ups, we dressed and headed down to breakfast. The place was packed and crazy busy, but we managed to negotiate our way through the buffet and with the help of multiple cups of coffee we were ready to head back to the airport. Check in went remarkably easy as did going through the customs VAT queues for our tax refunds. Our flight ( #7) was delayed about an hour, but otherwise went fine. We landed at Victoria Falls, Zimbabwe and proceeded through the gauntlet. Once we deplaned we were handed an immigration form. Have no idea why they didn’t hand them out on the plane to have us complete them before landing, but hey, not everyone is as efficient as I think they ought to be. We stood along the way and completed the forms then had to speak with an immigration guy to let him know we were only entering the country once so needed only a single entry visa. We got in line and waited. And waited. Finally we got up to the desk to discern the length of the wait. Lots of beurocracy. Lots of writing. And stamping. Fee paying. Finally through, with bags there and happily our driver awaiting us. As we exited the airport Dana and I paused for a photo op with a group of local gentlemen. We then climbed into the van and off we went.

Several others were also in the van being dropped at various hotels. Along the way we saw cattle and goats wandering at the edge of the road. We were brought to our hotel, the A’Zambizi, just outside of town right on the river. We settled into our rooms then hired a driver to take us the short way into town to do a bit more souvenir shopping. We we saw elephants along the way! After going through several local markets we called it quits and drove back to the hotel to have a bit of wine on our balcony before dinner. While eating we were entertained by a local group of men and women singing and dancing. The energy was amazing! 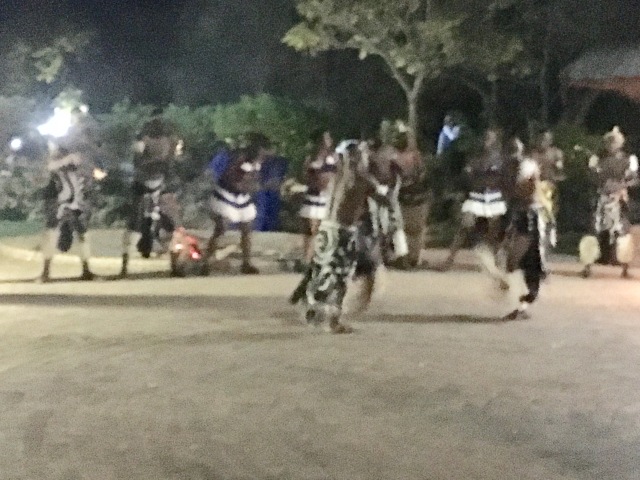