We began the day a mite earlier to get a head start. Up before the hostel crowd got to the kitchen, so we had the place to ourselves making breakfast and preparing our lunch for the road.

Packed up we headed off toward Donegal town. We reached there rather quickly, considering we weren’t on the typical minor roads we somehow find to explore places. We found a place to park and walked around the small town center, popping in and out of a few shops. We were waiting for the Donegal Castle to open its doors. By 10, they did just that. We’ve been happy that we early on bought ourselves Heritage passes, which gives us access to many historical places. The clerk stated that the first tour would not be until 1030 and it was with school children. No thanks! We did our own self-guided tour, thank you very much. The castle was originally built in 1474, but was rebuilt in 1623. It had a spiral staircase, going up towards the right supposedly to aid in fighting off intruders. Up those stairs was a magnificent Great Hall with an amazing, huge fireplace and a tremendous coffered ceiling. 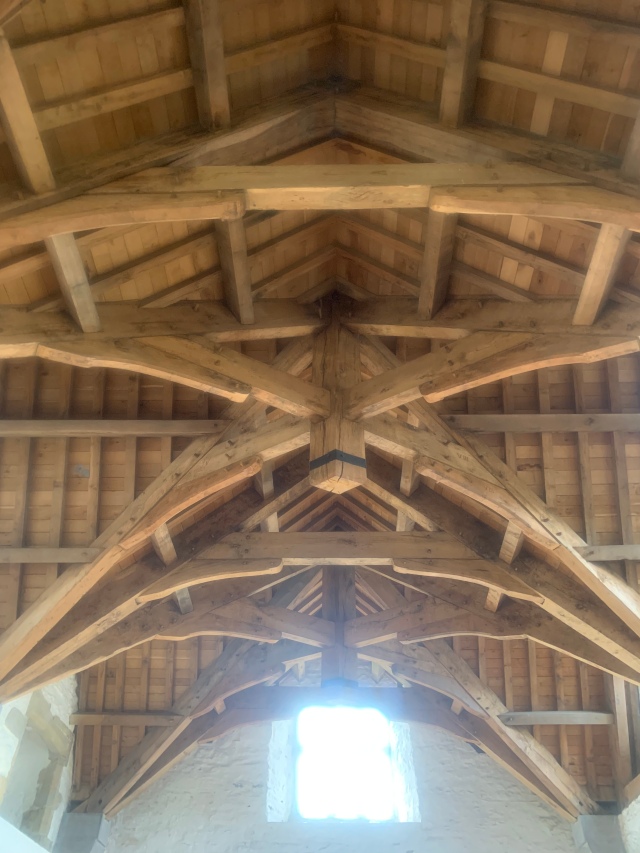 Leaving town, a short distance later, we found the Donegal Craft Village. It was a charming set of small cottages each one the workshop and retail space for individual handcrafters. We first chatted with the weaver who had a large 4 shaft fly shuttle loom. She said it was about 120 years old and that she had bought it from Eddie Dougherty, whom we met in Adara. Her work was lovely and very colorful.

The other shop we found intriguing was the woman who made felted pictures. She was kind enough to explain to us how she began working in that medium and how she actually made the pictures. I couldn’t resist purchasing a print of one of her pictures.

From there we ventured down to Rossnowlagh Beach. Unfortunately, it had begun raining lightly so we only walked a bit on the super wide expanse of beach. It’s a favorite spot for surfers here, with surfers in wet suits out enjoying the waves rolling in, along with a surfing class being conducted. 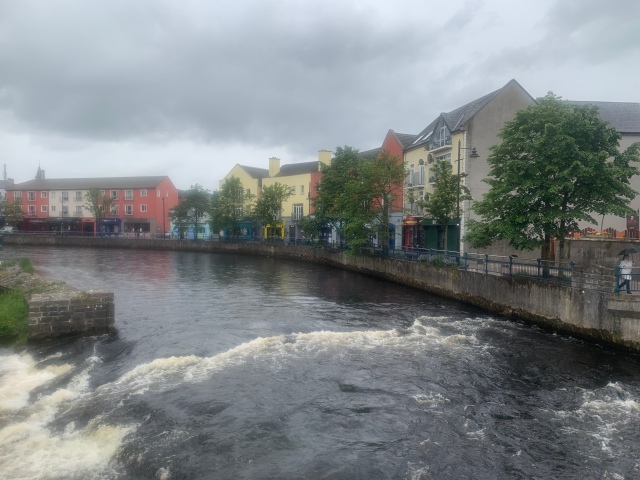 The next stop was the city of Sligo, where Mandy had spotted on Happy Cow a taquaria that had a vegan option. Sounded like a perfect lunch to all of us. However, driving through the city was a challenge and finding parking even more so. Eventually we found a car park, but it came with a rather tight entry. At least there was a spot for us. The gentleman overseeing the lot greeted us asking about how long we thought we’d be. Hmmm…perhaps an hour? He said fine, you can pay me upon your return. I’ll remember. No ticket, nothing. Ok.

Off we went to a delicious lunch of huge burritos. We were all thrilled. And happy that we saw a Tesco nearby to pick up some groceries. Upon exiting the store we found that it began raining in earnest. Ah, well. It is Ireland and we have raincoats. We returned to the car park and sure enough, the man remembered us and said, “Just under an hour, so €1”. Perfect. With amazing driving skill Kevin managed to get out of the very tight spot and get us on our way. 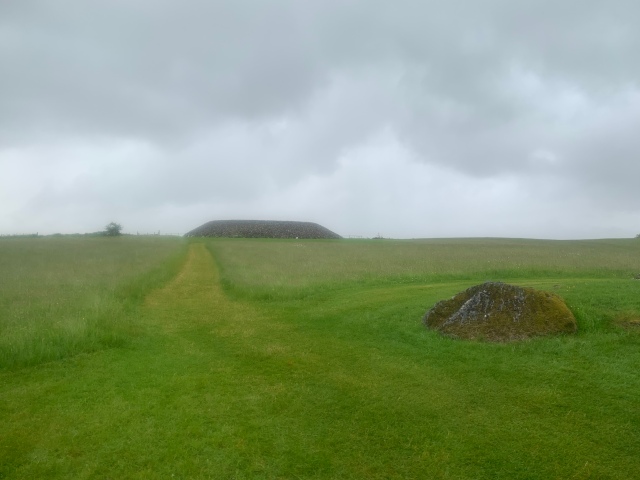 Our next visit was nearby at the Carrowmore Megalithic Cemetery, one of the largest Stone Age cemeteries in Europe. It has stone circles, passage tombs and dolmens thought to predate Newgrange, which we saw when we first arrived. We happened to arrive as they were about to begin a tour in English, so we jumped in. The guide was amazing! It was like listening to the best history professor ever, telling the story of the place and people and age when it was all created. He truly brought it alive. We listened indoors for quite some time before waking out to see the site, as it was pouring rain. Lots of raincoats and umbrellas and we were off! We stopped at the main reconstructed cairn and could walk into the center, where it had been situated to get direct sunlight at dawn on each October 31st. Upon leaving we were amazed to run into Jean, a Frenchman we met at the hostel at Mt Errigal.

Already rather wet we climbed back into the car and drove to the spot to climb up to Knocknarea Cairn, popularly believed to be the grave of the legendary Queen Maeve. However, it was pouring rain and overcast, so we all decided to pass on hiking up. 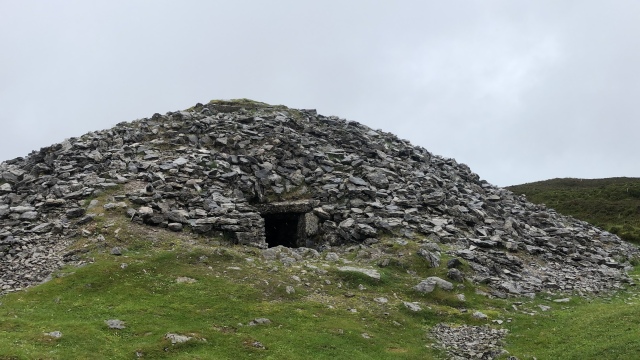 Instead we drove on to Carrowkeel Megalithic Cemetery, hoping things would be better to see it. Nope. The road got progressively worse, narrower than many we’ve been on, turning into gravel, then rough rock. No one else in sight. We kept driving until finally coming upon such a tight turn that we had no idea if we could go on or even back up if we attempted it. Yikes! I started fretting. The worse it got the more excited the kids were. I fretted more. Kevin reluctantly agreed to back up to somewhat of a pull off and park. Though it continued to rain we set off, up the road until we reached a path to head up to the passage tombs. It was an exercise in sheep pooh dodging. And the path got dodgier the further we went. I know I said I wanted a more adventurous journey with the kids, but they do tend to do things I would never dream of attempting. Like this. In the cold and rain. Through the sheep and pooh and mud and rocks. Uphill. We eventually reached the cairn and got to admire the ancient work. I thought that was it. Oh, no. Up still more to yet another one. And then they wanted to go further. I drew the line at that one. While they went off to explore yet another one I tried to shelter out of the wind and rain under my umbrella. Finally they came back and we could head down. I was wet but happy to get back to the car and say that I had managed the challenge. 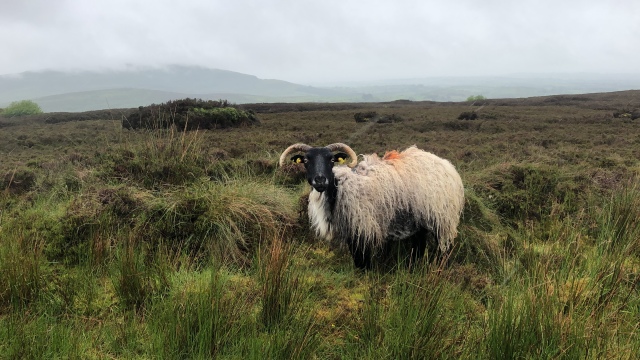 Fortunately we had an Airbnb awaiting us less than an hour away near Tobercurry. We were delighted to be met by the owner, with a fire burning in the grate, the house warm, a choice of bedrooms and two bathrooms. We sat in the cozy, snug lounge after dinner, enjoying the warmth of the fire. We got to see the peat that is burnt. A marvelous end to a rainy day. 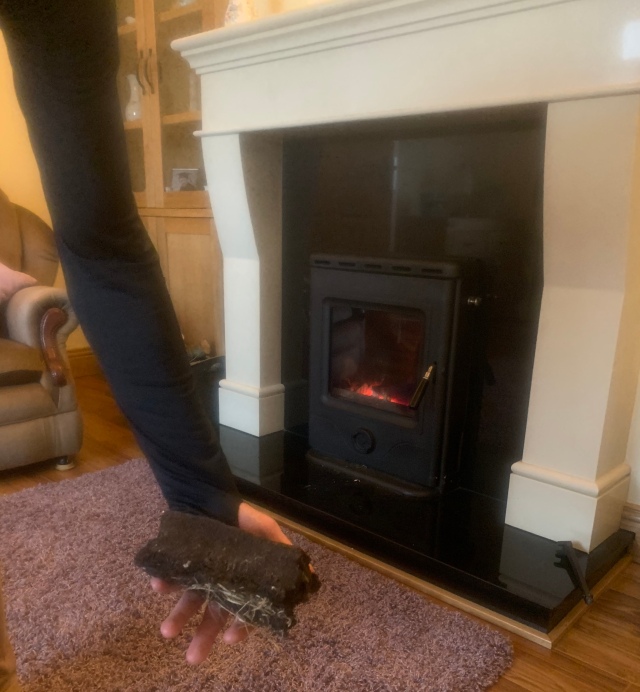