We woke a bit late this morning as Mandy didn’t feel the alarm she had set on vibrate. Not an issue. We got dressed and ready in no time and went to the hostel kitchen for breakfast. It was a lively place with most residents already there chowing down. 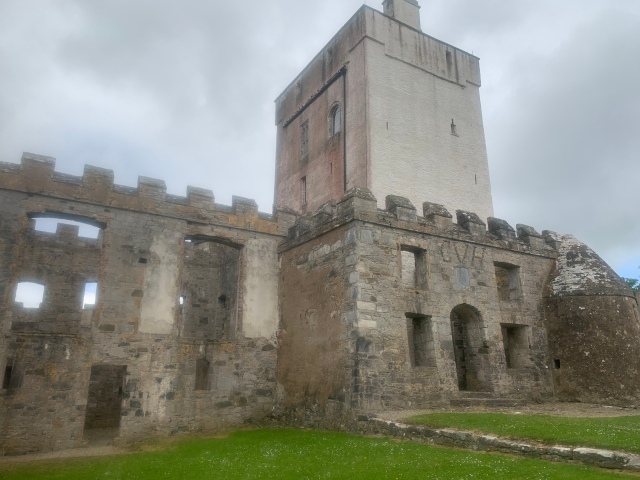 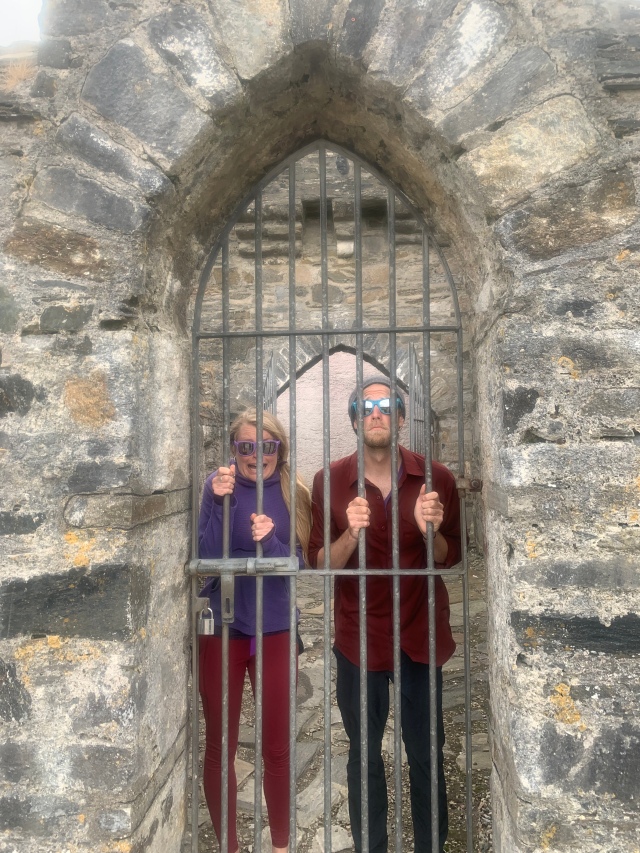 We packed up the car and headed to the Glenveagh national park, which we drove through yesterday, to view the lake. We by passed the castle tour as it only went hourly. Driving north we stopped not far along at the remnants of Doe Castle. It was located along a river, with quite a storied past, built sometime in the 1400s – 1540. It’s uncertain when and by whom it was built. As of now the only residents are noisy birds in the remains of the tower. 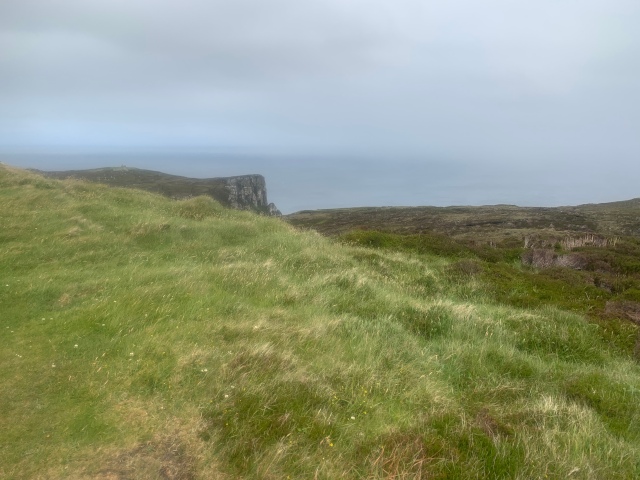 Heading north from there we went to Horn Head, a prominent cliff jutting out into the ocean. It was so extraordinarily windy that we did not walk all the way out to the headland. Even so, we could hardly stand upright with the wind. Besides, the kids were wearing their flip flops today, trying to let their shoes dry out from the boggy portion of the mountain climb last evening. In any case we still had a marvelous view.

Next Mandy wished to visit some beaches that our guide book mentioned as particularly nice. I can’t say I thought of beaches when coming here but the ones we saw were remarkable. We stopped first at Tramore beach where we found a wide expanse of beach with rolling waves and next to no one there. We sat along the edge of the dunes and had our lunch, enjoying the serenity of the place. One could walk quite a distance, but we just went a moderate way along before turning back.

Today’s drive was taking us on what is known as the Wild Atlantic Way…a route going all along the West Coast of Ireland. So far it is living up to its name….gorgeous scenery, rolling hills, mountains in the background, ocean out to the side, farms and sheep and cows everywhere. Lovely. And of course, narrow, winding roads with blind corners and blind hills. It’s the norm here.

We traveled to another beach along the way on the Green Coast. Just as beautiful as the last one, but a totally different appearance. The beach wasn’t as extensive and it was surrounded by wonderful rocks, many covered in tiny mussels. We even found a good many limpid shells, somewhat different than those I find on my beach at home.

The following destination was Andara, a town that was recommended for me to be able to see some Irish weavers and weaving. We first went into Eddie Doherty’s. He wasn’t there when we first arrived but his assistant told us he’d be back shortly. She gave me some insight into what they make there and the type of fiber they use. While we waited for him we walked along the main street. Unfortunately, the heritage center was closed due to it being Sunday. We forged ahead through the heavy rain until we came to a family run weaving and knitting enterprise. They had a large inventory of items they produce on site. As a bonus, they had several very old looms, one older than 600 years and two others that were about 200 years old. There was also a bit of a cottage set up in an old fashioned style. We admired all the items, with me gaining all sorts of ideas for future weaving and knitting projects. 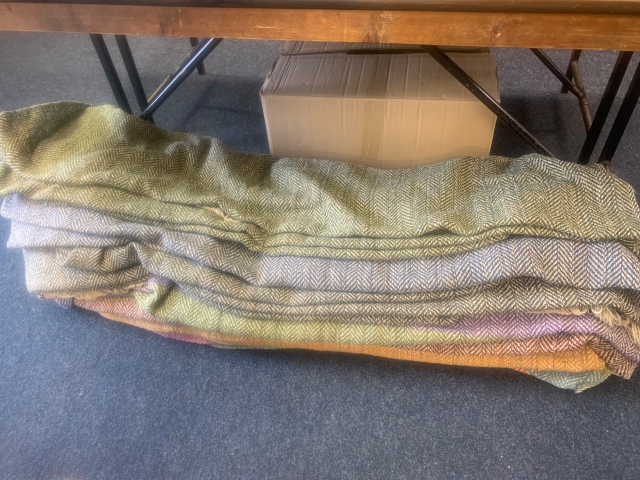 As we walked back to the car we found that Eddie had returned to his shop. He kindly sat down at his loom in the rear and demonstrated its working. It wasn’t too old of a loom, a large 4 shaft with a fly shuttle. Obviously how he can produce so much. When I asked how long he’d been weaving he said it’s been 62 years! I’m a newbie, weaving for only 4 years now.

By then it was time to mosey toward our accommodation for the next two nights in the town of Killybegs, along the water. We got checked in, happily with our own space and bathroom. Woohoo! We soon had dinner underway, then it was out to a local pub for some refreshment and entertainment.

3 thoughts on “The Start of the Wild Atlantic Way”