We rose this morning, had a quick breakfast then walked down to the Carnlough harbor. It was yet another film location, for which I’m now calling GoT, as I’m beginning to tire of writing it out. Supposedly Arya came up the harbor steps out of the water there.

That done we closed up the house and got on the road. We drove the Causeway Coastal Route which was amazing….right at the edge of the cliffs or nearby, narrow as all get out, winding, up and down, massive blind spots, hair pin turns but gorgeous views every way you looked. Fortunately for me, Kevin doesn’t seem to mind the driving, actually enjoying some of the hairier parts and luckily for all of us, there was hardly any other traffic. A few tight as spots, but never an issue. 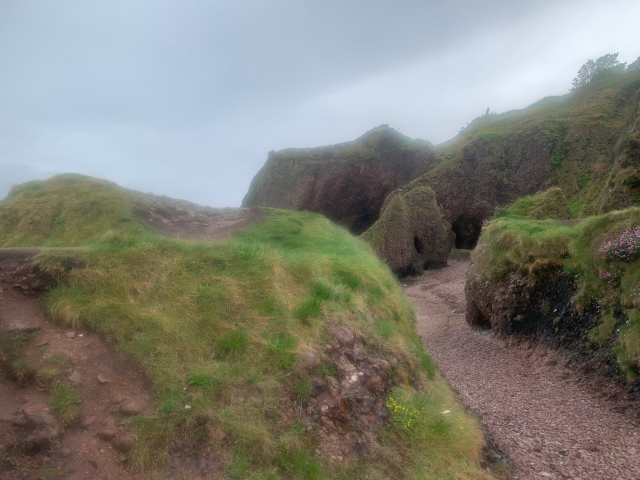 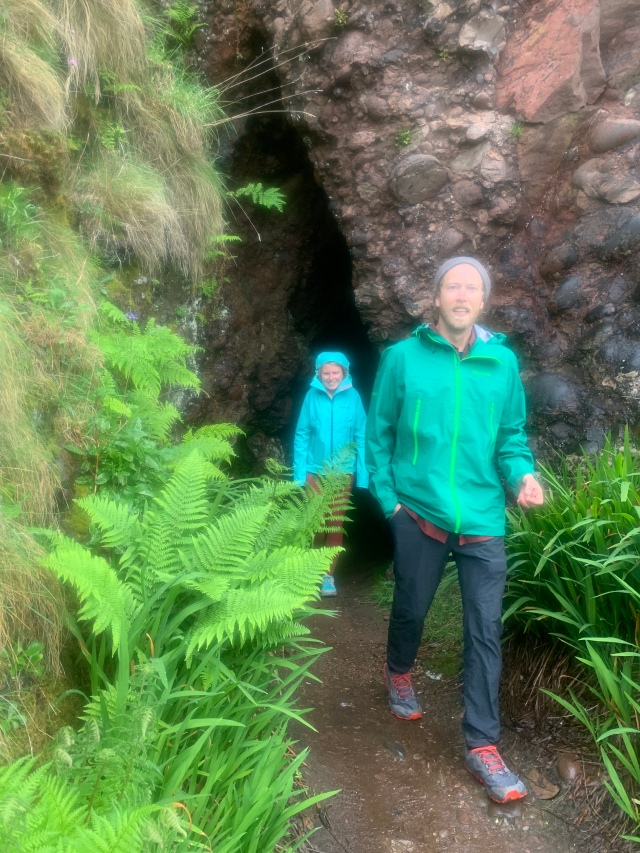 We found our way to the town of Cushendun, where there were a number of caves along the beach. They were easy to reach and we could walk into most of them. They, too, were in GoT, where the red priestess did sinister magic. Of course. After investigating the caves we walked toward the town, stopping to see an odd statue marking that a goat was the last animal culled due to the foot and mouth outbreak in 2001. Hmmmm. We walked across a charming bridge and headed into a local coffee shop. I had a lovely treat of a cup of flat white, reminding me of New Zealand, along with a delicious scone, served complete with butter, strawberry jam and cream. Yum! 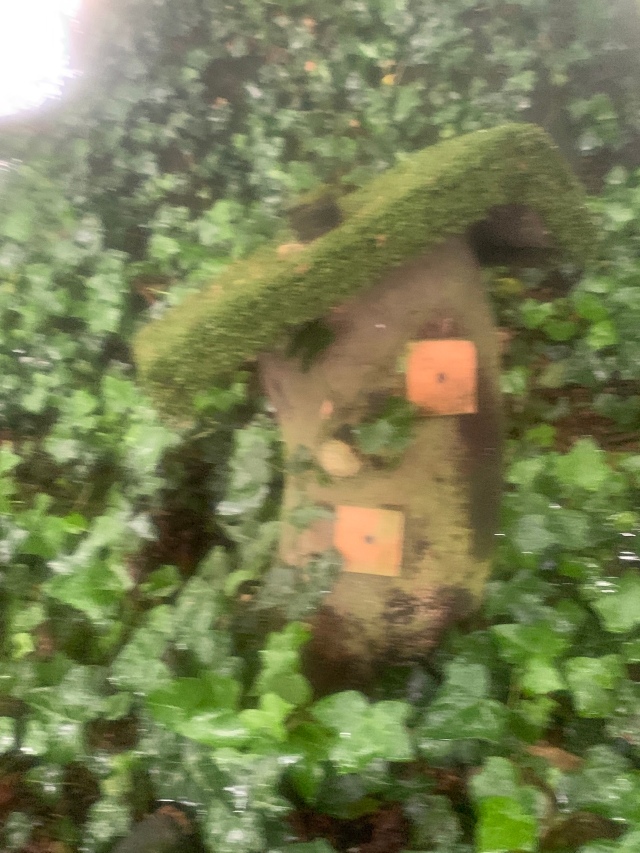 From there we drove on to the place called The Dark Hedges. It actually is a lane lined with beech trees that were planted in 1775, to enhance Gracehill House. Originally there were 150 trees; now 90 remain standing. Considering that the average lifespan is 150-200 years, it’s remarkable. It’s a magical place to walk, as the GoT folks obviously thought as well. Also, someone else thought so, as there was a charming fairy garden on the walk to the lane.

We then went back to the coast to the area around Cariek-a-Rede and wandered around an old quarry, looking out upon Sheep Island. It’s said to be named that because it could fatten 9 sheep, feed 10 and starve 11. Ha! 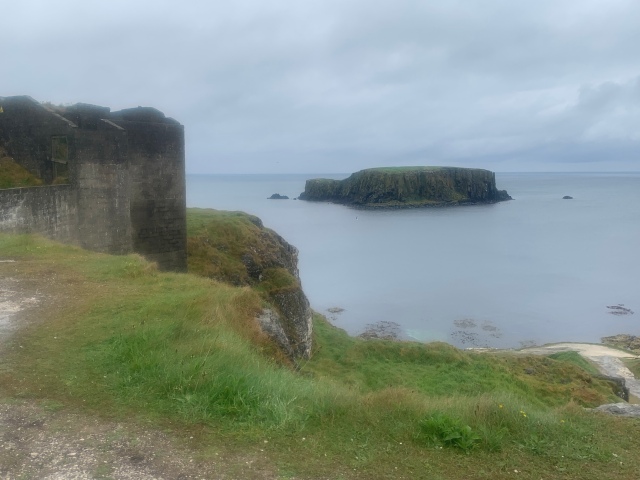 It was next on to the town of Bushmills, where, of course, is the Bushmill’s Distillery. Now, I’m not a whiskey drinker, but the kids are so off we went on the distillery tour. It was pretty interesting after all. They were thrilled to drink my sample at the end.

I did my designated driver routine and got us to the hostel just outside of town. We chose it as it’s within walking distance of the Giant’s Causeway. It was pouring rain when we had come out of the tour, so we first tucked in to the grocery store just across the street to get a few things for dinner. We checked into the hostel, had dinner, then saw that miraculously the rain stopped and the first real sun we’ve had since we got here appeared! Perfect! We quickly walked to the Giant’s Causeway, an amazing sight at any time but particularly wonderful in the setting sun. Legend has it that an Irish Giant, Finn McCool, built the Causeway so he could cross the sea to fight the Scottish giant, Benandonner. However, Benandonner pursued McCool back, but took fright and fled back to Scotland, ripping up the Causeway as he went. Hence only the beginning and end still exist. In reality, hexagonal basalt columns left from lava cooling over 60 million years ago. 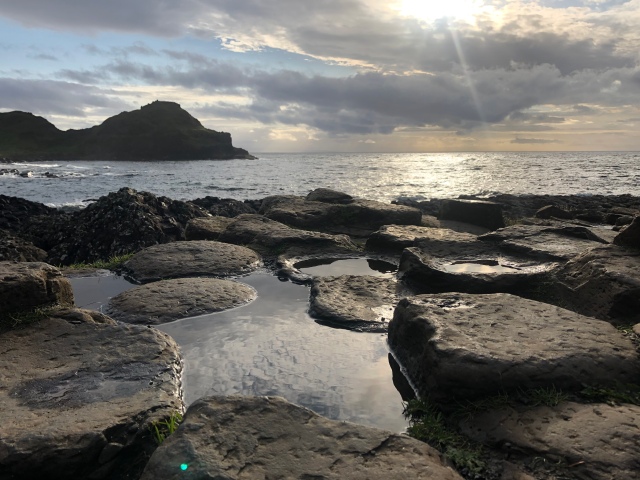 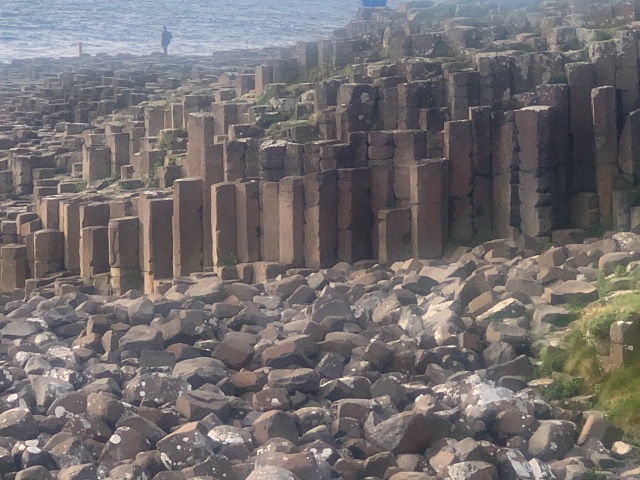