This morning we got up in sufficient time to reach Castle Ward outside of Downpatrick, to meet our booked Game of Thrones event. We packed up and cleaned up the house, locking the door and dropping the key into the mail slot.

We drove out of Newcastle and found our way to Downpatrick and out to the Castle, looking for Winterfell signs. The castle is located on National Trust property. We wandered a bit then found the spot to sign in for our cycling tour of 20 Game of Thrones sites. Paperwork signed we awaited the rest of the group. Turned out we would be 14. We gathered round the guide who walked us around the Castle courtyard carrying a number of large pictures from the first few seasons. Turns out he was an extra for the last half of the seasons so he had a lot of insight into how things were done. That was fascinating, as he could show us a picture, then point to where it was based and what they had to change to make it look the way they wanted. 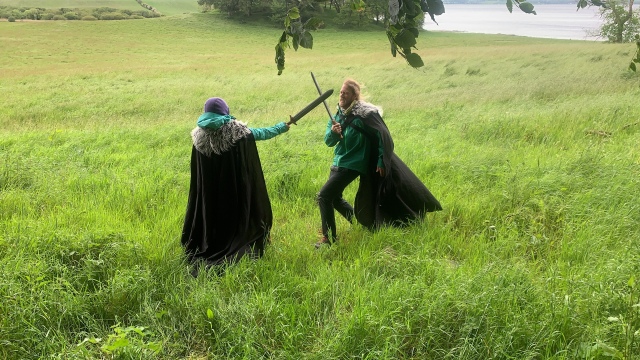 Once he explained all that we were handed bike helmets and given mountain bikes. Kevin’s had a bit of a map strapped to the handlebars. Mandy was given a satchel that held three cloaks, three swords and an electronic tablet with scoop about all the sites. With helmets on we took a few spins around the courtyard to familiarize ourselves with the bikes. We were able to ride off on our own to visit the sites, taking as long as we liked. It allowed for some fun roll playing. While sporting the gear a woman waking by, paused and finally said “I guess you’re big fans”. At least two of three of us are. We saw the field where the Lannister army camped, where Walder Frey’s castle was, where Robb and Talisa got married and where Tyrion and Bronn met Shagga, among others. We biked between all the sites then rode off on other trails in the park. It had been a few years since I basically quit cycling, so this was an adventure, especially since I’d never done that sort of path riding. 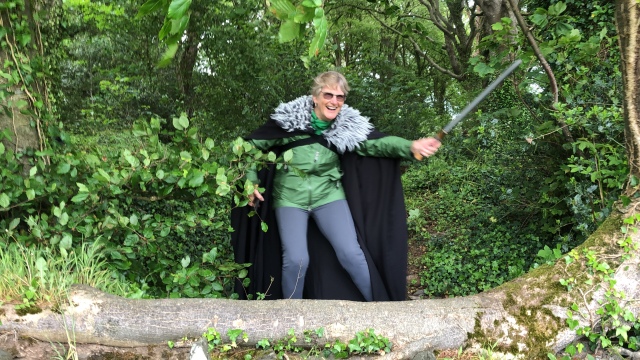 Once we turned in all the gear and were yakking with the inital guide I mentioned that the only hard thing was looking high enough in the trees to spot the location signs. He said it was “due to the fact that people kept nicking them as souvenirs “.

We walked back to the car, got out our lunch and had a bit of a picnic along the shore. Once finished we headed back into Downpatrick, where we went to the Down Cathedral to visit the supposed grave site of St. Patrick, which is marked by a large granite stone.

The next stop was the remains of Inch Abbey, another Game of Thrones site, where Robb Stark was near the trident. It was a lovely, park like area, which over looked the water, with the cathedral in the distance. While there an entire tour group arrived, all wearing cloaks and carrying pennants on staffs. There’s no shortage of fans here.

By then we decided to head to Belfast, which we only breezed through, driving by the waterfront to see the area where the Titanic was built and launched. We didn’t have much patience with city stuff so we drove off, heading to the shore causeway drive. I had booked a place for us just north of Larne, in a little coastal town called Carnlogh. We were met by the home owner, showing us around. The house is over 160 years old and at one point was owned by Winston Churchill and his brother. Go figure. 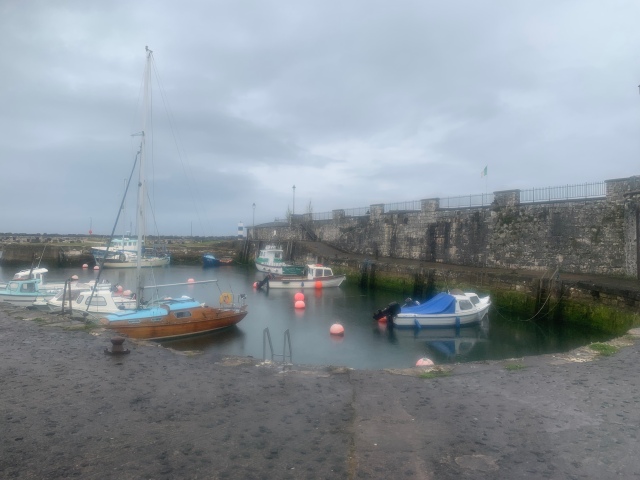 We decided to walk a bit around the little town, hunting for a pub and possibly dinner. We found a place called the Waterfall, where there were only a few patrons. The kids ordered beer, which I deigned to drink as the gin selection was rather limited. A local, Brian, began regaling us with all kind of stories and nonsense. Amusing. The young bartender, Kieran, seemed rather long suffering, with his antics. Once Brian departed Kieran livened right up.

But after a few beers we were tired and really hungry, so we ended up just noshing on our food stashes back at the house. With a load of laundry in the washer life was good.