We opted for a slow start this morning as we were just having a transition day going from Te Anau to Invercargill and down to Bluff briefly to get the lay of the land. We packed up and wandered over to a local cafe where we heard they had passion fruit smoothies. After our desserts of the last two nights we’re big passion fruit fans. Dian got a smoothie and I went with a large Americano. Woohoo!

We chose to drive the scenic route rather than the speedy one and were rewarded with spectacular views, especially as we came upon Gemstone beach on Te Waewae Bay. The huge waves just rolled in on a beautiful beach with the mountains in the background. Along the way we came across an amusing sign so we knew to look out for sheep crossing the road, but none were to be seen except in all the fields. Thousands in the fields, as well as hundreds of deer. I refer to then as dinner on the hoof for Dian, as she loves the venison here.

And of course we passed our share of road kill. We were told that with the invasive possums and stoats we would do well to aim for them if we see them crossing the road and that we might get a bounty from the rental car company for doing the country a favor. Ha!!

Eventually we reached Invercargill where we once again saw hikers on the road. Well, I know how much my daughter dislikes road walking so we pulled over to see if they wanted a ride. They were from France and Croatia and have been here for a year hiking and working. But they were only headed a bit further so they declined the ride. We then stopped for lunch in a spot that was mentioned in our Lonely Planet guide book. I had an amazing seafood salad complete with salmon, shrimp and calimari. Delicious!

Our plan today was to drive to Bluff to figure out if we could get to Stewart Island. Our book and the pamphlets we’ve read weren’t exactly clear on details. So into Siri I put Bluff Harbor thinking that’s where a ferry most likely would be. Wrong. We drove the 10 miles out just to find that we were at some sort of industrial area on the opposite side of the harbor from where we needed to be. The problem was exacerbated by the fact that I drove through a gate entrance where there was no attendant but once I realized that I needed to turn back the gate was closed and still no attendant! Oops! Finally a rather surly gentleman came by not at all amused by my excuses but he did lift the gate. Off we went to the correct side of the harbor and easily found the ferry terminal. A most helpful woman filled us in on all we needed to know, got us booked on the morning ferry, a tour on the island and the return ferry. Excellent! 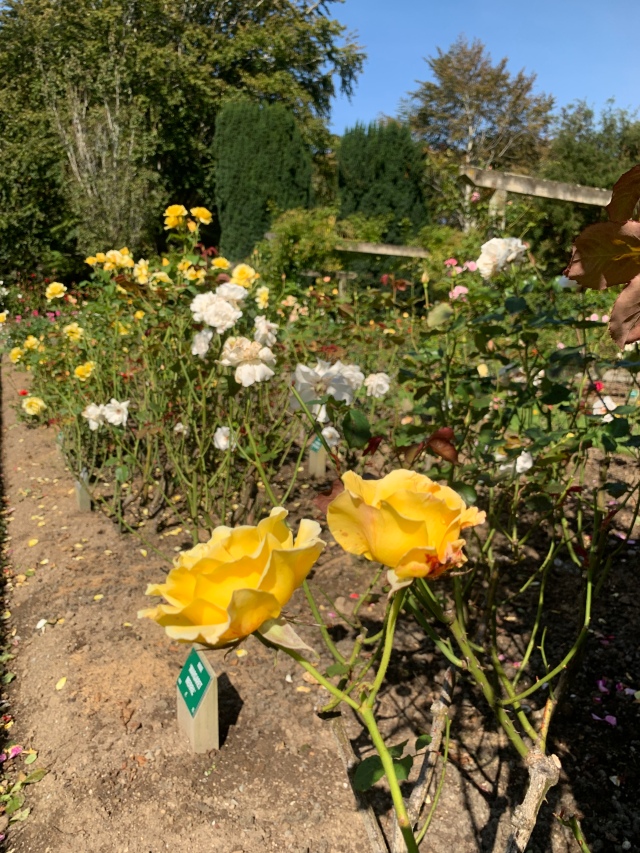 We then drove back to Invercargill, where we picked up food for dinner and breakfast at our favorite NZ grocery store, the New World market. We still had a bit of time before we could get into our Airbnb so we walked through the Queen’s Park. We were rewarded with seeing among other things a lovely rose garden.

We found the home where we were to stay and were met with a very welcoming couple, Barb and Tiki. We enjoyed sitting in their garden while we were fortunate enough to get a load of laundry done. It’s the small things in life, isn’t it?