Another long day of flying awaited me as I woke to the news of a train derailment blocking I 5. Dreadful as that was to hear, selfish me worried if it would mean I couldn’t reach the airport. Fortunately, it was between Tacoma and Olympia on the southbound lanes. So off I went with my sister taking me to meet the airport shuttle. All went well until I must have had a senior moment going through security. Though I have TSA pre-check, I had to remove my coat, but with no bins on that line it threw me off a bit. I still had my passport and boarding pass in hand and must have set them down by my bags without realizing it. Then I got tagged for additional screening. Once I got through and went to collect my gear I realized that my passport and boarding pass were no where to be found. Panic set in! I quickly let the TSA perceive know and after about ten heart pounding minutes they found them! Whew! Bullet dodged. In all my years of travel I’ve never done anything like that which could have imperiled my journey. You can bet I held on tight to them after that. 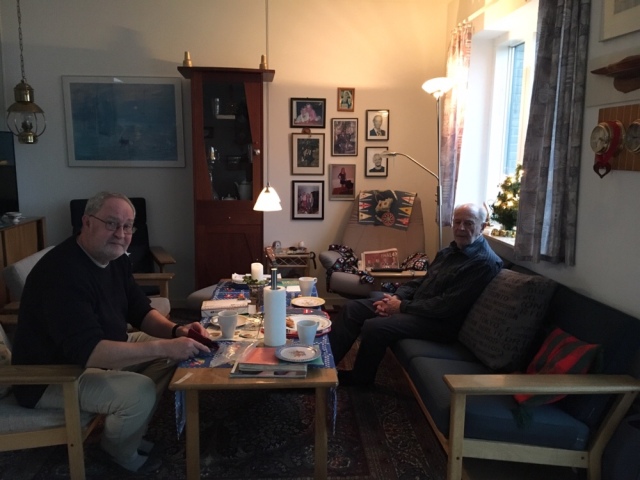 The first crowded flight took me to Frankfurt, where I went through immigration and transferred to the next short flight taking me to Billund, Denmark. And once I cleared customs there was Steen, my Danish dad! How wonderful to see him in person once again and looking amazingly well for his 94 years. We dragged my big bag out and met Peter, my oldest Danish brother who waited with his car to drive us to Vejle. I was happy that I’ve been practicing Danish the past few months, as the talking began non-stop. Usually it takes me a few days to get back into the swing of it, so that helped. But we do tend to use a mix of both Danish and English to get our points across. We arrived at Steen’s house, complete with not only a Danish flag, but also an American one flying, with me settling in and then sat down to have afternoon coffee. One of my favorite Danish customs. This time some lovely Danish pastry accompanied the coffee along with the conversation. Peter then prepared a nice, light dinner. 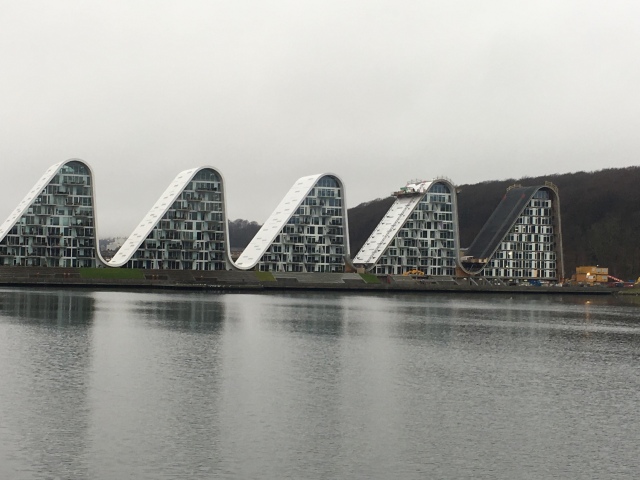 Eventually I gave in to my sleepiness after 36 hours without sleep. Managed a good 12 hour night waking up to coffee and rundstukker ( Danish rolls), one of my favorite things for breakfast. Then Steen and I decided to drive into town. He wanted to take me to the grocery store to buy a few things a vegetarian would want to eat. Denmark tends to have a very meat centric diet (Considering that there are reportedly more pigs than people in the country, not surprising) and he just wanted to be sure how to feed me. So off we went to Aldi and Føtex gathering acceptable items. After that we drove out along the harbor so he could show me the many changes to the city scape, including some remarkable condos considered a “wave”. The next step was the church yard so I could pay my respects to my Danish mom, Inge. They actually decorate graves for the holiday here and it was lovely. Steen’s parents are also buried there and he said eventually he would be as well. I responded “not any too soon, I hope”. His response: “you’ll come visit me, won’t you?” I hope more while alive.

Back to the house for a late lunch of rye bread and pickled herring and French bread with havarti cheese. Then, while Steen rested I went out for a walk down memory lane. Off I strode first along the beach but strangely enough there were a bunch of red jellyfish. Here, as at home, that usually happens in the summer. Perhaps some global warming effect…. Steen told me that the fjord had not frozen solid since about 2010, as it did the year I lived here. That year we could walk out the door, down through the garden, put on our skates and shove off, skating over the entire fjord. See…I mentioned this was a trip down memory lane, right? After that I determined it might be better to stick with the sidewalks so I headed off toward the school I attended, Kirkebakkeskolen. Still there, but looking a bit different. Apparently they did a renovation some time back. Fun to see some students about, but what a difference …. Before the students were pretty homogenous, but not now. Europe and Denmark are certainly changing.

After that I walked back to the house where I lived back in 1970 at Droshoved 6. When Steen sold the house a few years back the new owners did a huge remodel job so it doesn’t look at all the same. Something I noticed all along my walk – lots of new houses or renovations. Personally, I prefer the old style. Especially those with the woodwork and thatch roofs. Alas, many of them are being torn down. 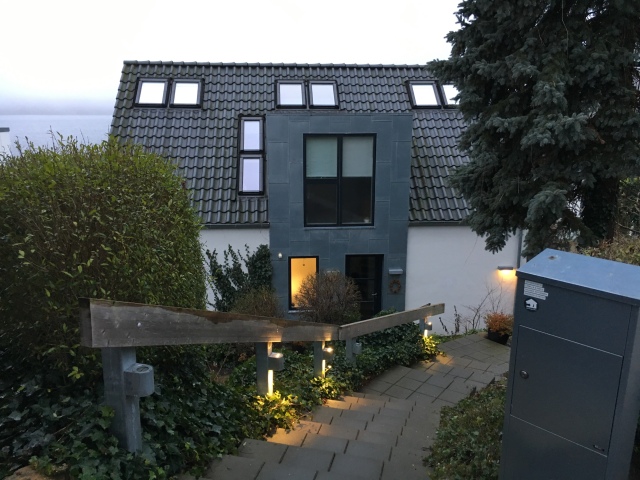 We then had a late supper with Steen stoically agreeing to eat a vegetarian meal. His comment: “it isn’t so horrible, actually it tastes pretty good.” But I don’t think I’ll get him to do many more. After all, he said he’s managed to live this long eating meat. Ha!

One thought on “Back in Denmark”