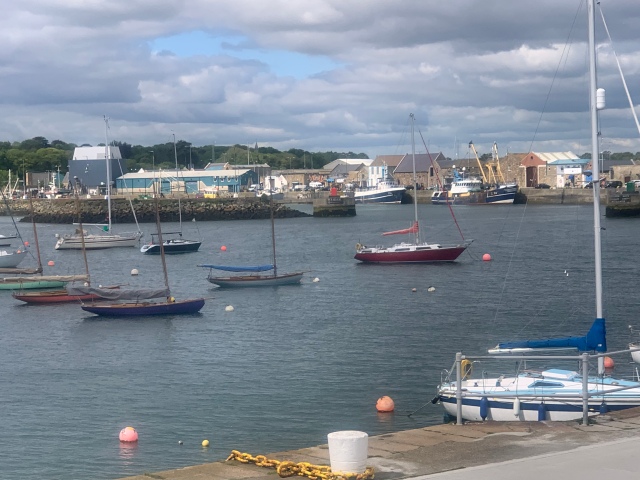 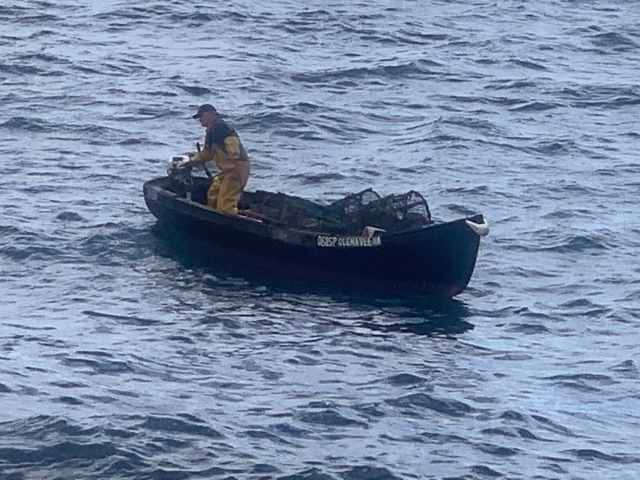 It was an interesting night at the hostel… lived up to the review comments we read prior to booking. It was rather noisy from the pub below and it had limited electrical outlets. However, the 8 bed room we were assigned was clean and the bunks were comfortable enough. Only one other resident had come in while we were still up and about, a young woman from Mexico, with whom Mandy chatted a bit in Spanish. We climbed on our beds, me taking melatonin and putting in earplugs. We were sleeping well even with a few others coming in late until a rather inebriated older guy showed up flashing his phone light all round trying to figure out which bunk was his. After a bit he ended up rousing most of us making a drunk phone call on speaker phone. Geez. Comments from the rest of us finally shushed him. Even with that we got a fairly good night’s sleep. 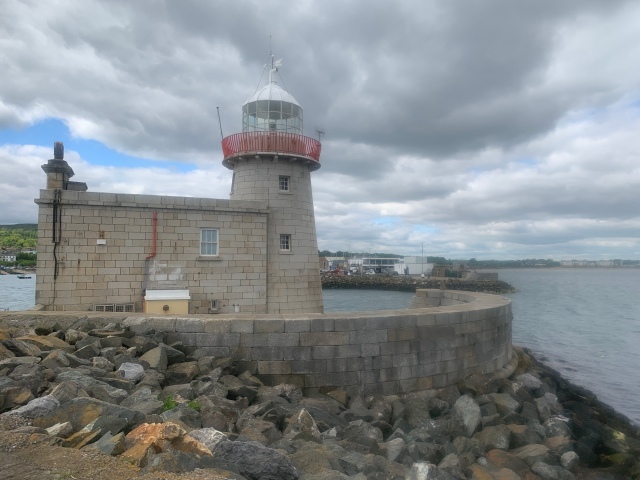 We decided to start the day by heading out to the peninsula just to the east of Dublin to the town of Howth. The Danish woman we met last night suggested that we check out the Howth cliff walk. Kevin was still willing to drive to get us out of Dublin so we headed out after picking up a few groceries for breakfast and lunch. We reached the town after clearing the congested traffic in the city. It was a relief to get to a less hectic area. It was a small seaside town with a lively harbor filled with sail boats and an old and new lighthouse at the end of the quay. After walking out there we drove up some very narrow hillside roads and reached a spot to hike along the cliff. It was as beautiful as we were told. 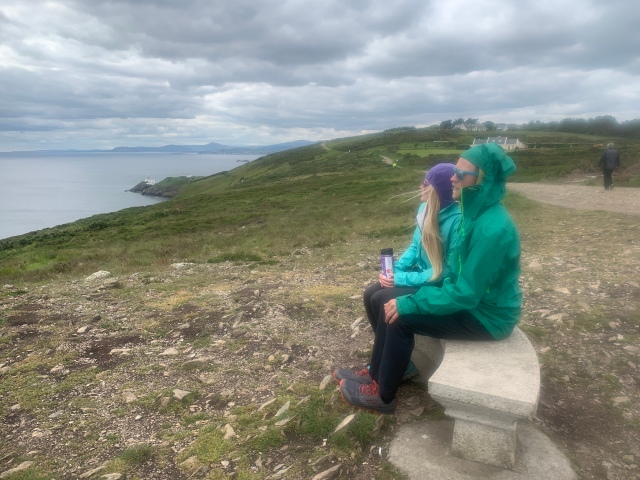 Upon getting back to the car we decided that a cup of coffee was in order so we found a local shop to duck into. Just as we were getting out of the car an older gentleman zipped into the spot behind us and dashed ahead into the shop saying “I forgot to pay my bill!” The clerk didn’t seem to mind as she replied “no problem, John!” I placed our order, then as I stood waiting another obvious local nudged me and smiling said “Don’t you know it’s a men’s only place?” Well, there were mostly men in the tiny place. Looked like a regular meeting spot. Just then the older woman seated at the counter looked my way and stated “The cheek of him!” Ha!

We took our coffees and headed back toward Dublin so we could head north. I had booked a house in Newcastle but we hadn’t planned where to go in between. I pulled out the guide book and found that we were passing near the site of the Battle of Boyne, fought in 1690, the largest single action between two armies that was ever fought in Britain or Ireland. The battle was between the forces of William III and James II, with William being the victor. It was a well done site with static displays, canons, descriptive videos, fields and gardens.

Mandy took her first turn at driving on the left and did quite well despite the very narrow roads. We shall all hopefully be great at it by the time we leave.

It also put us in close proximity to Brú na Bóinne, also in County Meath. It’s a UNESCO World Heritage site with the prehistoric passage tombs of Newgrange, Knowth and Dowth. They are over 5,000 years old! We were able to see and enter the tomb at Newgrange, which is surrounded by 97 stones including standing stones, and the impressive decorated entrance stone. The tombs are all built in dry stacked stones, then covered in soil and sod, with a huge exterior. The interior had a very narrow passageway that led into a small inner chamber. The opening allowed the sun to pass through and illuminate the inner chamber on the winter solstice. The other ones were built to have the sun enter for the summer solstice and the two equinoxes. Imagine the capabilities of those early people to determine that and to erect such structures. Amazing. As we were awaiting the bus to return to the car park Mandy suddenly called out “Mellanzana!”. For those not in the know, that is the Colorado company that makes the pullovers we wear and affectionately refer to as “Mellies”. They’re quite distinctive and not often seen. The woman who was wearing one was from New York and said her son in Colorado had sent it to her. She was equally excited and made her husband take a picture with all of us saying “These are my people!”. 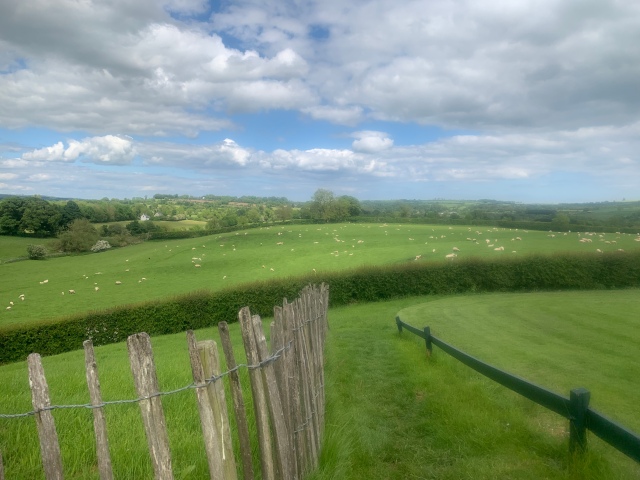 By then the time was getting on so we opted to head north to our home for the next two nights in Northern Ireland. Kevin by now was zipping us along both on the motorways and the smaller roads. We were thoroughly enjoying the scenery – lots of trees, hedges, farms and fields, cows and sheep and horses, the latter two larger than the Icelandic ones.

We finally reached Newcastle but could not find the house. After knocking on the wrong door and getting a man answering who looked right out of typecasting for any British comedy series and several pedestrians, we still had no idea. I finally called the owner who directed us to the house on the next street over. Her mom met us to show us the house, immediately saying, “I hope you don’t mind, but I want to watch a bit of the news on the tv, as my nephew is supposed to be on and I forgot to record it”. Well, of course we didn’t. Once he finally was shown she told us all the story behind it, as he’s a journalist who was caught up in a case involving freedom of the press. Then we discovered that the gas was empty for the cooker. She called Jimmy, the man just across the way who cares for things for them and he got a new tank connected. We were all set once we finally figured out the door lock. Always something new to learn!