We gave ourselves a sleep-in this morning, not rising until 8 AM. We got started on our usual morning routine, with Crosby starting up the stove to heat the pan of water for our coffee and tea. While he did that I began breaking down the lower bed and putting it back to bench seats and the table. Once we had that underway Mandy started scrambling the eggs for breakfast. We sat down to eat eggs, crostini with cheese, bananas and Icelandic yogurt. Delicious! Once finished eating, we shared the clean up duties. It’s been amazing how well we’ve managed to easily split the duties and efficiently use the space. 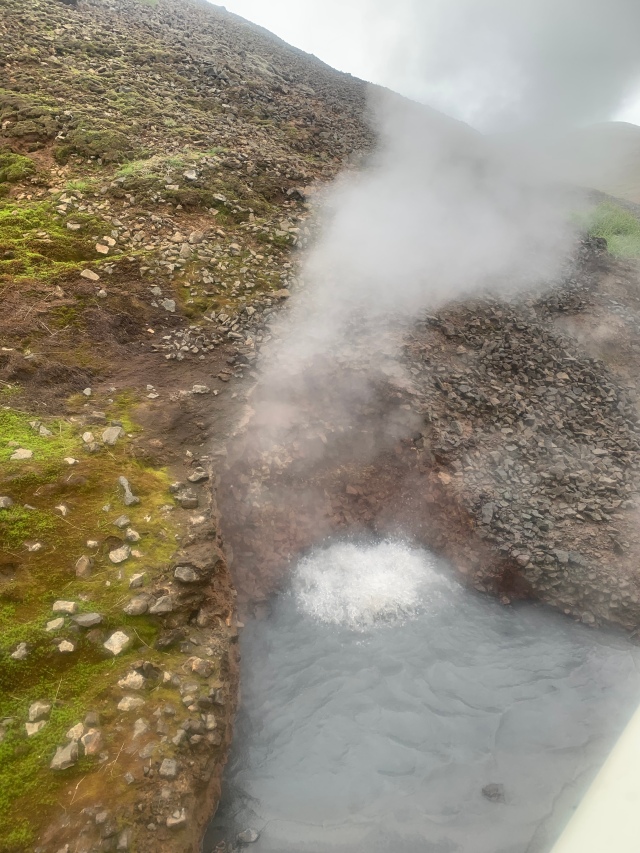 This morning our goal was to go to the hot springs river for a swim. That required us to drive to the base of the mountains, park and then hike up. For that I was pleased that I had my hiking poles. It was a well done path but there was no shortage of ups and downs, a few spots to jump over a bit of water and at least one spot where I didn’t care to look down. Mandy conveniently skipped over the tidbit of information about the elevation beforehand. Hmmm…guess she knows her mom well. The only other issue was all the horse manure we had to dodge. But we hoofed it up there in an hour, even with stops to gawk at the scenery, including a waterfall. We passed a number of spots with steam emiting from the ground or mud bubbling up, with plenty of danger warning signs telling us the pools were over 100 degrees C. We had no problem staying on the path until we reached the bathing spot in the river. They had built nice wooden paths on both sides, with several dividers to give a modicum of privacy, of which there really was none. We knew ahead of time that there were no changing rooms. No one cared. The kids quickly changed and climbed the few steps into the warm river. I decided to sit on the boardwalk and just dangle my feet in. It was fabulous and so out of the ordinary. We timed it well, as it wasn’t very crowded, but after a bit more people were hiking in. Time to skeddaddle. Clothes were changed and we began the hike out. Lots more people were coming in, including a group on horseback, which certainly explained all the manure. We got back to to our van and quickly pulled out food for lunch, as the hike had given us all an appetite.

We drove out and headed to the Reykjanes lighthouse, the oldest lighthouse in Iceland. It was a stunning headland at the far southwest corner of the country.

But then we took off for the big event of the day and a way to both celebrate a wonderful trip, but also for me to take a bit of a trip down memory lane. We were headed to the Blue Lagoon, where I originally went in the early 1990’s when I worked up here. But that’s where the similarity ended. We walked in to a glitzy spa-like location, after we had to reserve a time online. We were given electronic bracelets that allowed us access to a locker and gave us our face masks and drinks. Woohoo! We changed into our suits and waded into the hot water. It was blissful! There were people from all over the world equally enjoying the same beautiful place. We wandered aound the huge pools, under wallking bridges, into smaller pool areas, under a heavy water deluge, over to get a silica face mask and over to the bar for drinks. We floatted here, there and everywhere, exploring the entire place. We tried going though what appeared to be a hobbit-like door into a steam room but could only tolerate it a few minutes. Now, let me tell you, none of that was here when I worked here… instead I recall a rather rustic wood building where we changed and left our clothes on benches and ran through the snow to jump into the water. And it was dark, so I basically saw none of the surroundings. What it has lost in charm it has gained in convenience. We stayed in for three hours before finally calling it quits. We all climbed out and happily went into the showers, which we hadn’t had since Lake Myvatn. We hardly recognized each other all cleaned up and with clean hair. 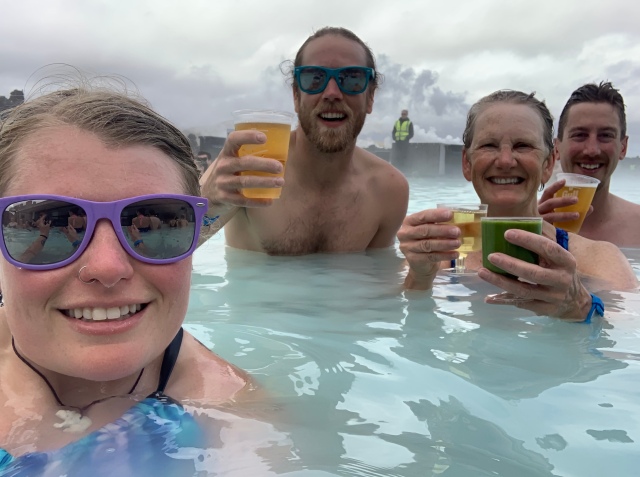 By then it was late and we headed off to our camp site up by Keflavik at Sandgerdi. This is our last night van camping.