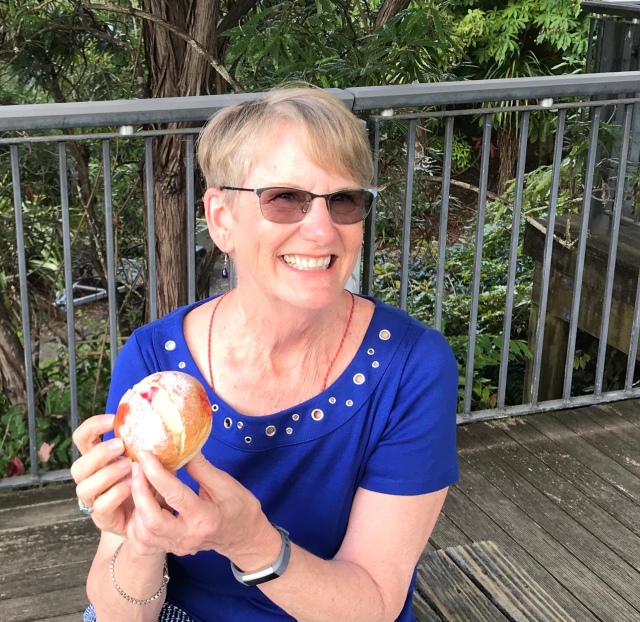 Another easy start to the morning. Fixed breakfast, packed up and soon we were on our way. Yesterday the director’s wife told me to make sure we went to Tommos bakery in the morning and get their cream buns. She raved about them and even showed me a picture so I would know exactly what to get. Plus she added that they also make delicious hand pies. Doesn’t take more than that to get me there. Turned out the bakery was only a few minutes from the place where we stayed. In we went, spotting the cream buns immediately. They looked decadent. We asked for two, plus two smoked fish pies. And coffee. Properly laden we headed off to our morning adventure.

We had heard that the Hamilton Gardens were nice, but that turned out to be an understatement. They were exquisite! For nary a fee, as they are public, in we went. They have an intricate layout, with separate specialty gardens connected by central courts. We viewed a Japanese contemplation garden, an English flower garden, a Chinese Scholars’ garden, a Modernist garden, an Indian Chat Bagh garden and an Italian Renaissance garden. Whew! All that was just off the first court. They were beautifully laid out, complete with buildings appropriate to the venue. The next court revealed a Te Parapara (Maori) garden, a Tudor garden, a sustainable backyard garden, a kitchen garden (where the produce is used in the garden cafe and in local shelters), a herb garden and a tropical garden. If that wasn’t enough they have six more specialty gardens under development. This was by far my favorite garden of all we’ve visited here. Makes me start itching to get home and muck about in my own garden this spring. 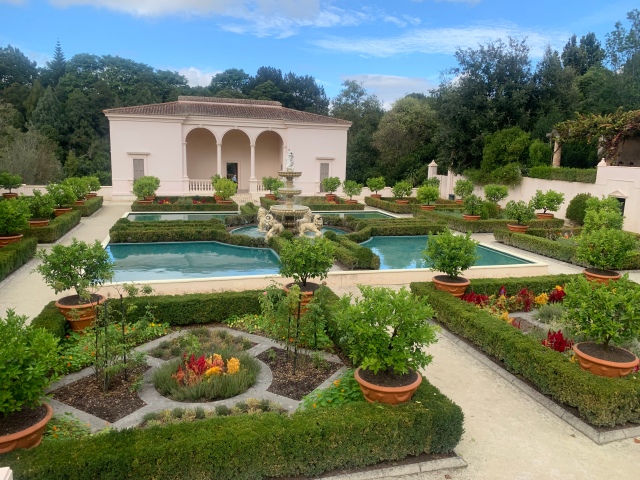 We drove on, heading for Thames at the base is the Coromandel Peninsula, our stop for the night. Along the way, going through a small town, Dian called out “There’s a cow!”. Now that shouldn’t be an unusual thing in the land of sheep and cattle. But this was no ordinary cow. This was a painted cow on the street corner. Back in Nelson when we met Dian’s friend Terry, he told us to be on the lookout for the “cow town”, but he couldn’t remember the town’s name. He just said “You’ll know it when you pass through”. He was right! We hooted with glee that here it was in Morrinsville. Now there were many roads we could have taken today so we were just lucky to have selected this one. We putzed along as slowly as traffic would allow with Dian, my ace photographer snapping pictures. When I could I pulled over for her to get out for better shots. They were most amusing. I don’t know the story behind them, but we enjoyed them nonetheless.

Then it was just a drive through the countryside on the usual narrow, two lane roads until we reached the town of Thames. We stopped for a few groceries then headed up a hillside to our house for the night overlooking the town and the water.