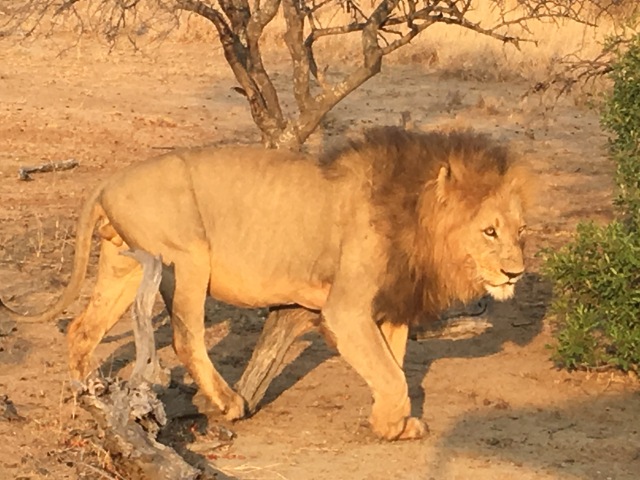 After a night when the weather turned windy enough for us to lose power for a bit, we arose at the usual 0500 for the morning safari. A half cup of coffee later and we were on our way, bundled in the vehicle with blankets around our legs against the cold wind. It began as a not too eventful ride, mostly spotting birds, such as the ground hornbill, a rather sizeable bird that resembled a turkey, complete with a red neck that looked like a gobble, a crested Francolin and a giant eagle owl. We continued our drive when Tim stopped for a line of stink ants crossing the road. That’s how conscientious they are about protecting the animals.

And then the morning excitement began. First we came across two male lions that were wandering along then proceeded to just lay down right where we had stopped. We learned that the older lions tend to have darker hair around their mane, a signal for the females that they’re strong enough to have aged. We watched as they lay there with big, full bellies, obviously sated after a recent kill. We drove further along and came across another pair of lions, a male and female having a big drink of water at a watering hole. The male kept drinking but the female began wandering off. Tim decided to follow her. Soon she began to make some noise, which he said meant she was after something. Well, that something turned out to be two more lions! A male and female. It was turning out to be a lion day. Once the three met up they all turned back in the direction of the watering hole. But water was not what that male was after. First, he sprayed a tree with a prodigious quantity of liquid. Then he kept nudging closer and closer to the female who had come with him. Before we knew it she layed down and he was behind her. He quickly mounted her  – it was over so fast I couldn’t get a video. Ha!

Enough lion entertainment for the morning, we continued on our way. Tim and Eddie were still on the search for us for other critters. We came across a large group of elephants, which included some babies, one which appeared to be only a few months old. We watched as they broke branches and rooted around for food. The big one right in front of us was digging around and managed to come up with a potato. You could see it hold it in the end of its trunk before slipping it into it’s mouth. 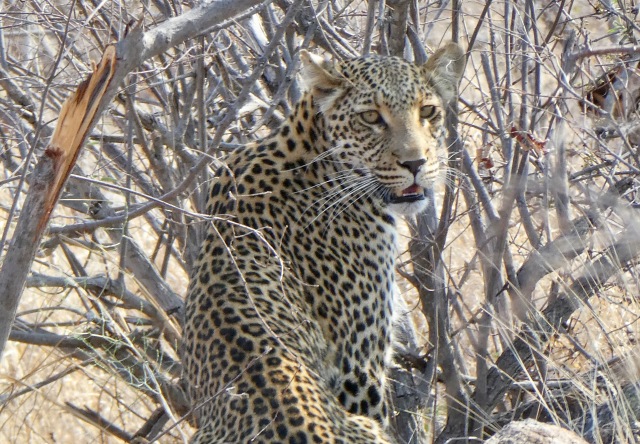 Then Tim asked if we minded going a bit longer this morning as he hoped to spot the ever elusive leopard. Of course we all agreed. So off we went into an area we hadn’t been in before where we had to crunch through bushes and over downed trees but there she was! A beautiful leopard, all by herself, as they generally are. To follow her as she kept slowly walking along we had to continue bushwacking with the vehicle, dodging the branches as we went. Totally worth it to keep her in sight. And that made #5 for us in seeing the Big 5: elephants, rhinos, cape buffalo, lions and leopards. Woohoo! 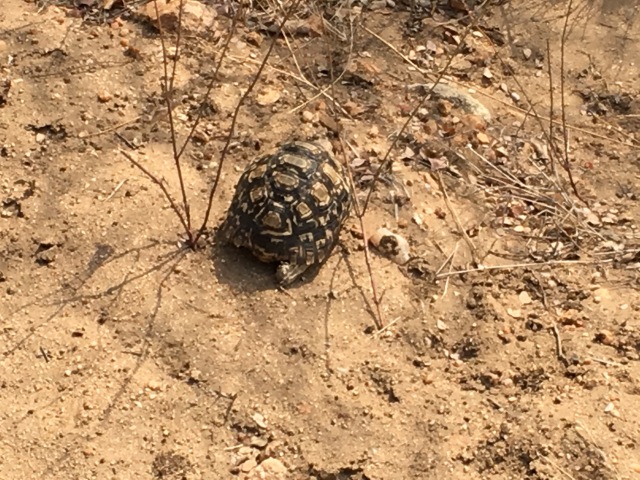 Back to the lodge we went with all of us rather exhilarated that we had seen all five of the big ones, especially the leopard. Along the way Tim pointed out a leopard tortoise, which he stated was a sign that the spring rains were coming. Glory soon had breakfast ready for us, though as usual we’d had our coffee and shortbread break while out and about. Then we all dispersed to either nap, shower, read, write or whatever until lunch. The day was cooler with a good amount of wind so no lollygagging was done at the pool. We met for lunch on one of the verandas, then soon were headed out for our evening safari.

Still cool I bundled up as I sat in my usual spot up in the high back seat. We drove along as usual without seeing much. Finally a warthog showed up along the side of the road, but they’re wily crestures that don’t want to be seen. Probably because they’re prey for so many out here. We tried following him but had difficulty so finally abandoned him.

We passed one of the rather ubiquitous trees, with Tim informing us they were called Shepard’s trees. Nearby flew some grey helmet shrikes. And behind quite a few trees stood a pair of kudus.

Tim said he’d thought he ought to try to spot some giraffes for us after all the rest of the animals we’ve seen so he said, “we’ll head over there as that’s where the giraffes like to be” and sure enough, we soon saw one! She looked stupendous munching on the few leaves she could find. It’s a good thing that the spring rainy season should be here in a few weeks to leaf things out.

After watching her awhile we drove on and were totally surprised to come across yet another male lion, this one solitary. Apparently he’s the one the others have been pushing out of the area to take over his territory. He was much more leary of us than all the others had been, but we still managed to follow him all the way to a large watering hole that Tim thought he was heading toward. Along the way we saw him stop and sniff a bush and Betsy remarked “did someone forget to tell him he’s not a herbivore?” Ha! We were told he was smelling his rivals. He finally reached the watering hole where we watched him drink from the opposite side. As soon as he bent down to drink Dar said ” look, he’s doing a downward cat”. With Eddie using his big light on him we could watch while he drank for a long time, loudly slurping up the water. It gave us some good pics with the reflection.

After our usual stop for wine and snacks we drove back to the lodge and were greeted by Glory with hot cloths and a great shot of Pims and lemonade. And then we spotted the fire that awaited us by the  table that was set up. It doesn’t get much better than that.