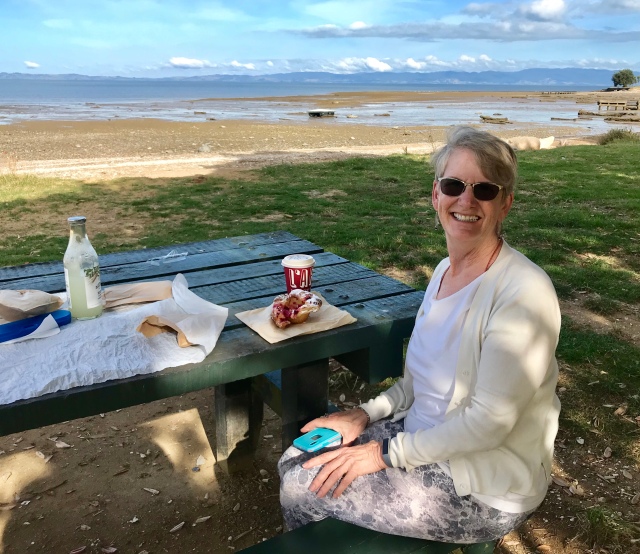 Or… How I celebrated my 65th birthday. Definitely one for the memory books. 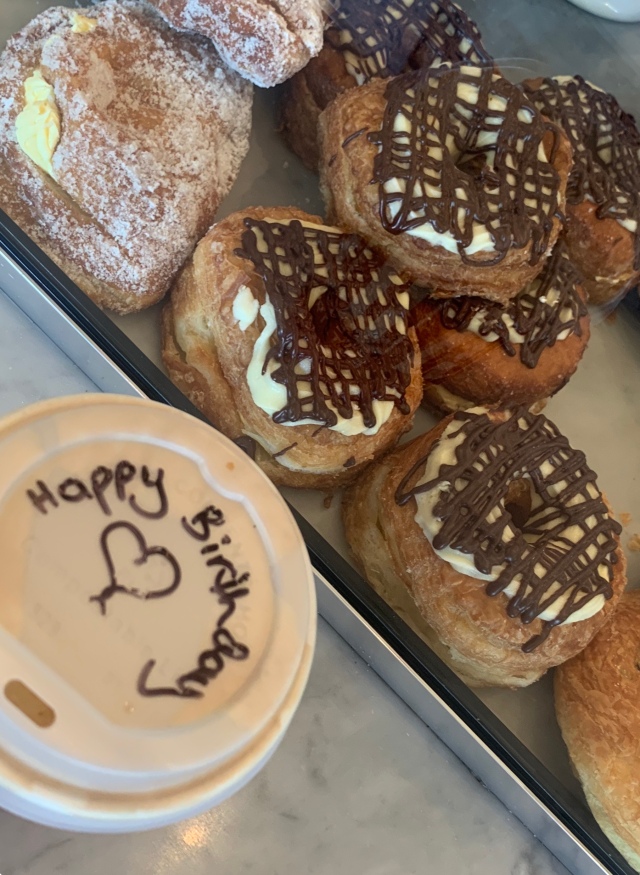 We made quick work leaving this morning, zipping down the hill from the house where we stayed and headed straight to the bakery we spotted earlier. It was a busy place so we knew that was a good sign. In we went, choosing a pastry to enjoy, plus another cream bun to share. I mentioned to the very pleasant women working there that I was willing to splurge on the pastry as it was my birthday. The next thing I knew, when they handed me my take away coffee, I looked at the lid where they had written “Happy Birthday” and drew a heart. How sweet was that?!! 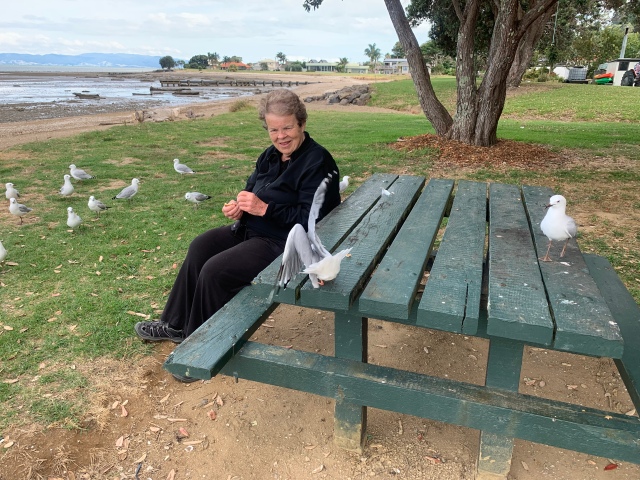 We drove out of Thames a bit until we found a spot along the water with a picnic table to sit and enjoy the pastry. While there a group of small gulls hovered about obviously awaiting some tasty tidbits. We laughed at one rather aggressive one that was very vocal and kept trying to push off the others. Dian decided she wanted to feed them. Living where seagulls are prevalent it’s not something I do, but we got out a slice of bread and she had the best time throwing them crumbs. 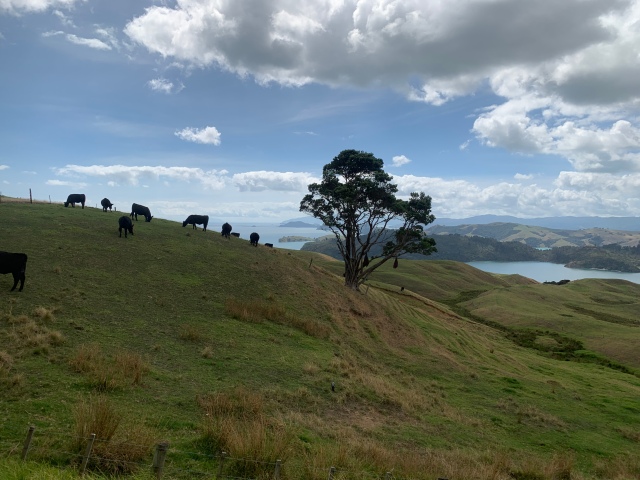 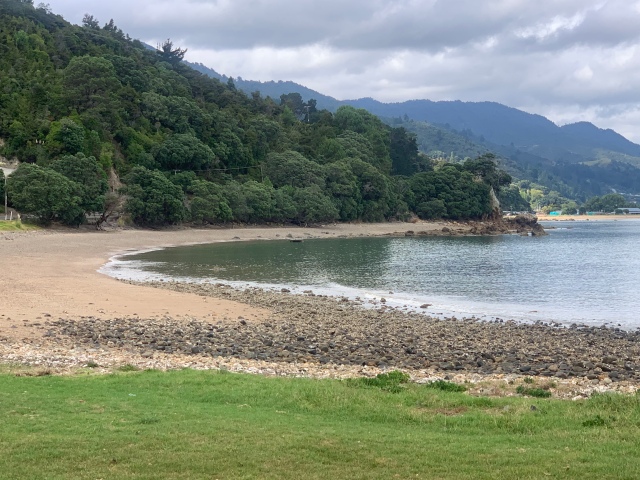 Onward along the West Coast of the peninsula we drove, hugging the coastline, twisting and turning on the usual narrow, two lane road. We stopped frequently, to take in the gorgeous views or to let those who wished to speed along rather than savor the time and place. At the uppermost vantage point there was a local guy selling coffee out of the back of his SUV. Complete with an espresso machine! I asked if he drove that road every day. Yes, he said he did. I mentioned how surprised I was that there were no guardrails. His response: “Well, they would just have to keep replacing them after people go over the edge”! Ha! 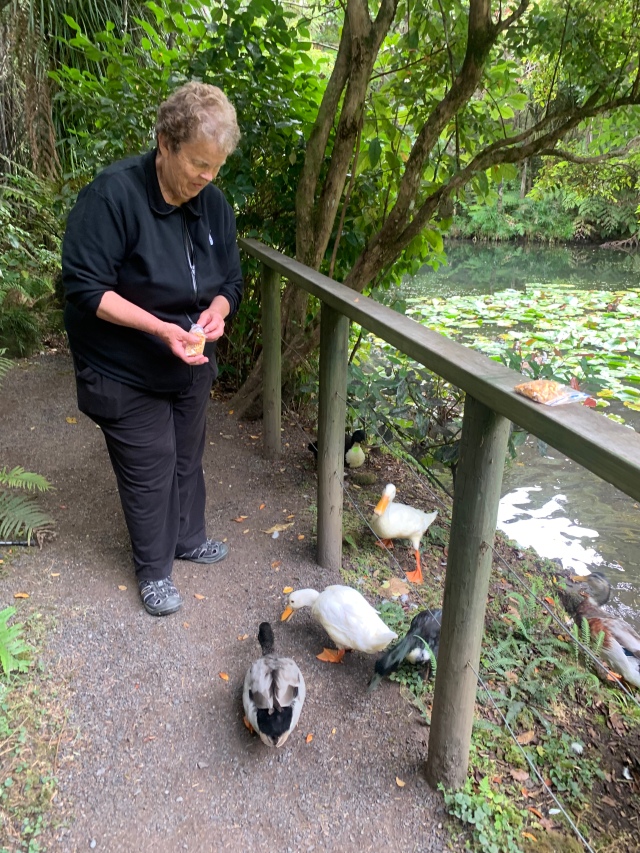 We turned into a road that was to take us to a privately run water garden. Yes, another garden…. We never tire of them. This one required us to drive 4 or 5 miles on an ever narrowing road with multiple one lane sections, curving wildly. Eventually we reached the garden and was it ever worth it! It was begun in the early 60s and has changed hands several times, but it had matured beautifully. Pond after pond, complete with lily pads and multiple ducks to feed. We had gotten packets of corn to give them when we checked in. The ducks were greedy devils, needing no provocation to come out of the water or along the path as soon as they saw us. Obviously they associated people with food! After we had walked along all the ponds we followed a forest path for quite some way, as the sign had indicated it was the way to the “Seven Stairs to Heaven” waterfall. Who could pass that up? We hiked up and were rewarded with a beautiful waterfall. 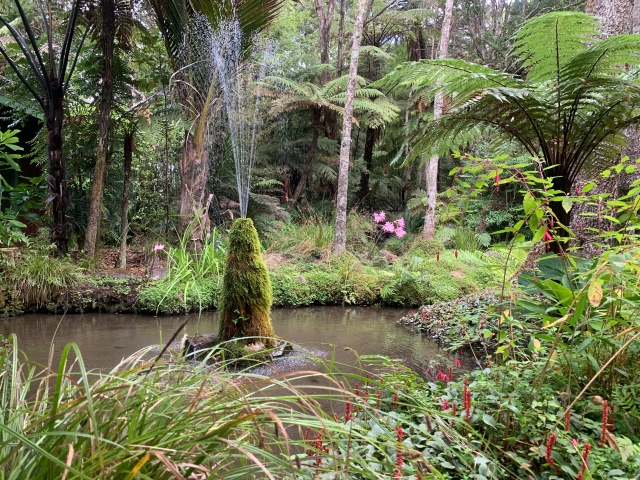 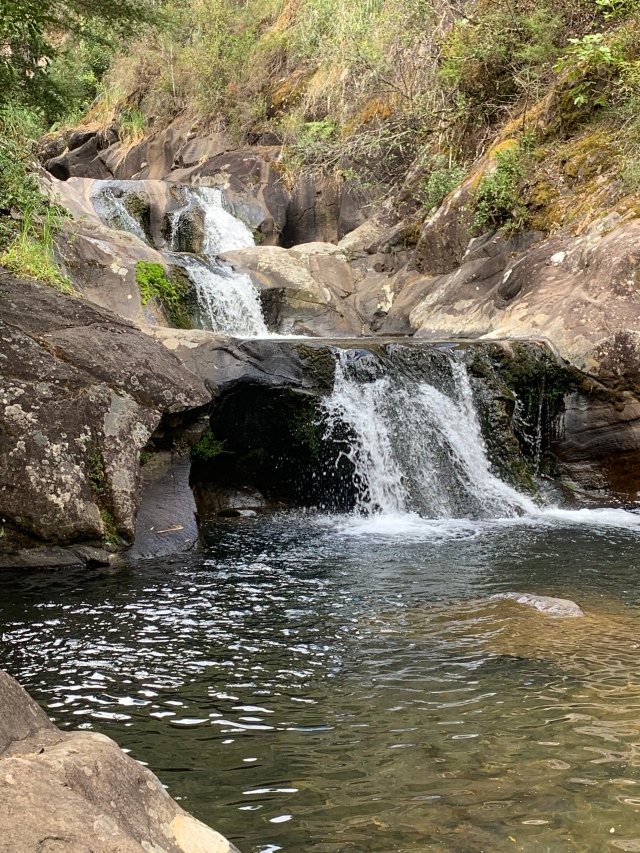 We left the gardens and continued north along the coast, coming into Coromandel Town. We were looking for a vegetarian cafe we read about but when we found it, we were disappointed to learn it was closed. But the good news was that it was right next to the narrow gauge train that went up the mountain that we wished to ride! Perfect! And, we got there in the nick of time for the next train and there were still seats available. Must have been good birthday karma. This railway was built by a local man starting when he was 40. He was a full time potter and wanted to use the clay found on the mountain as well as the wood to fire the kilns. Plus he wanted a place for potters around the world to come. This railway was incredible! It wound up the mountainside, through tunnels, across bridges plus having to go on various sidings to back up to change direction. It took us to the top of the mountain for a beautiful view, then back down again. 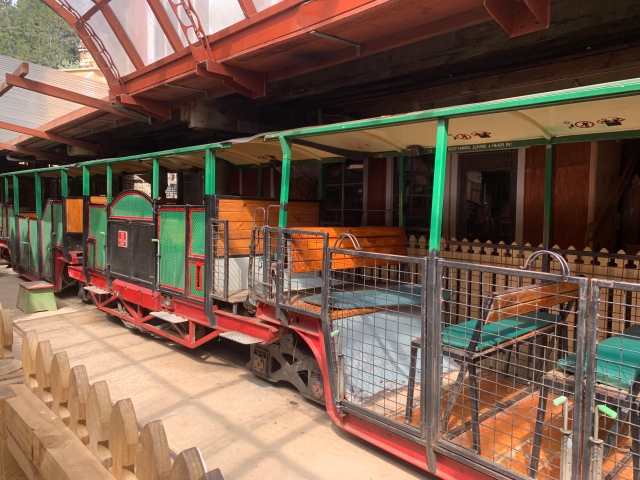 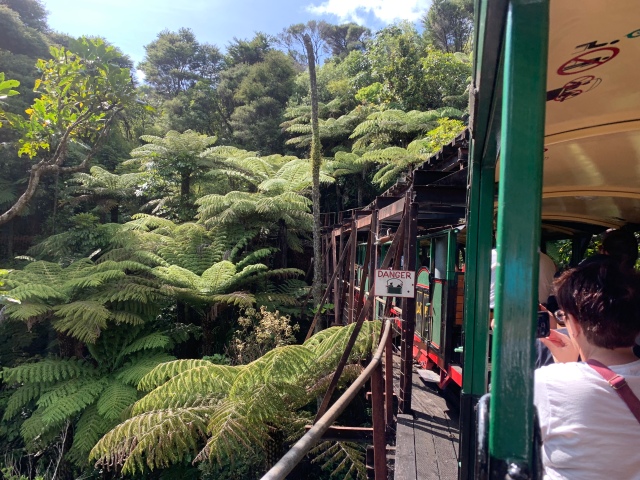 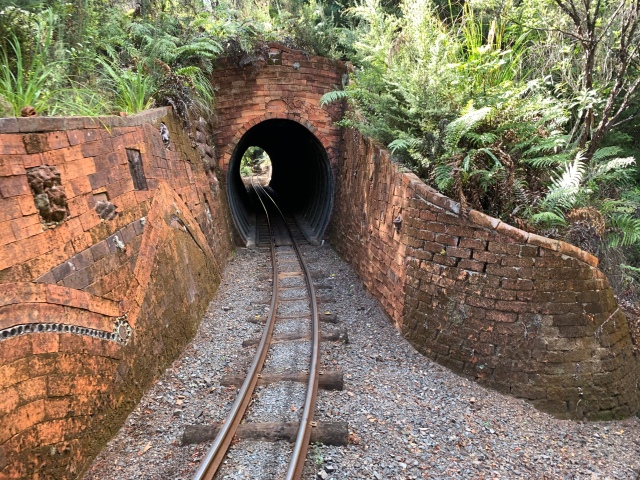 We then proceeded to drive across the peninsula on yet another crazy, curving road, coming to our destination for the next two nights: Whitianga. We found the house and were greeted by the most wonderful, gracious host Annemarie. She and her husband, Frederick, immigrated here from South Africa 18 years ago. They recently moved here from Auckland and are renovating their home. But they first renovated the guest house, where we are staying. It’s cute as all get out. But the best surprise was that she had a cake on the table along with a birthday card! How amazing! We chatted for quite a bit, meeting their very friendly cat and their Italian chickens and rooster. They gave us advice on restaurants so off we went for dinner. Dian insisted on making it a special day, including dinner. And that it was! We had the most amazing, delicious seafood dinner, with 5 different varieties. All while sitting outside, on a beautiful calm evening along the 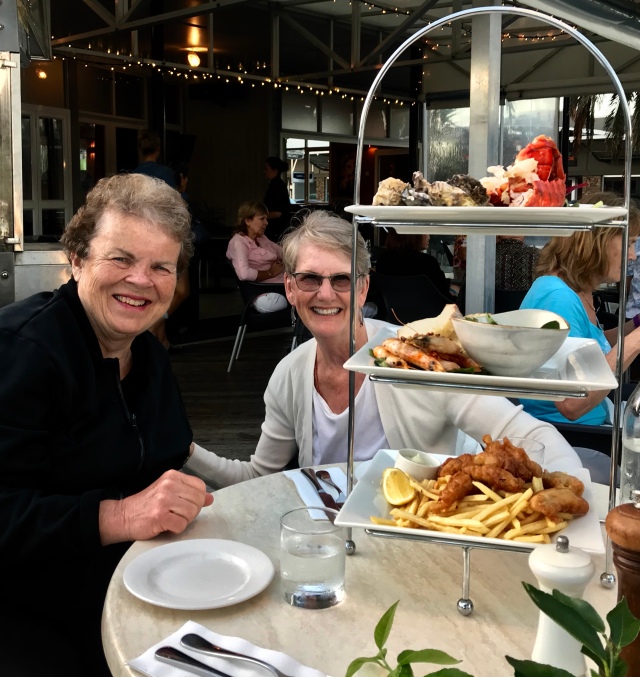 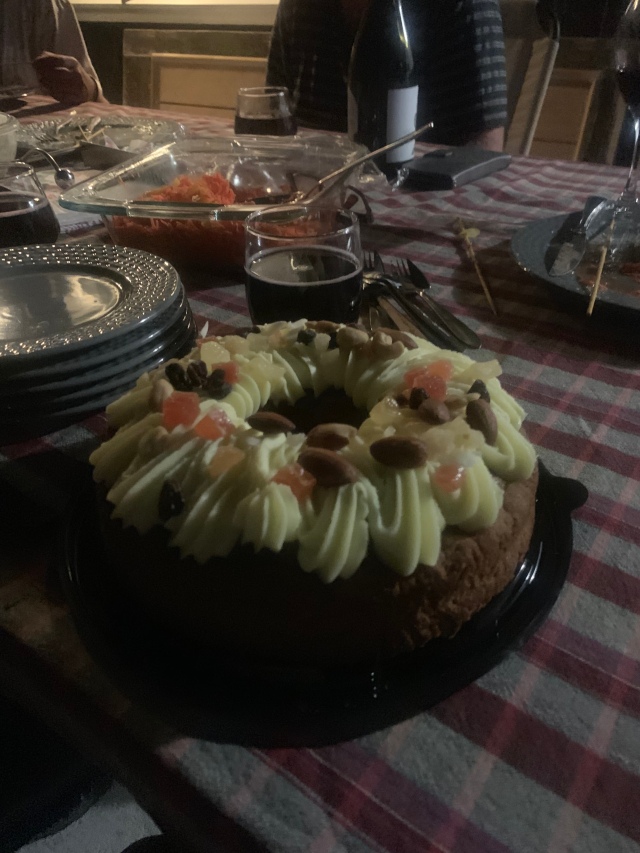 Coming back to the house we decided we should share the cake they left for me with our hosts and their friends, Andre and Tillie, who were here having dinner with them, sitting outside on their deck. Fortunately they didn’t mind us crashing in with the cake. They even sang happy birthday to me in English and Afrikaans and a birthday greeting in the language of Lesotho. How good is that?! After a lively conversation (their friends had also immigrated here from South Africa) we reluctantly called it a night. A better birthday I can hardly recall. 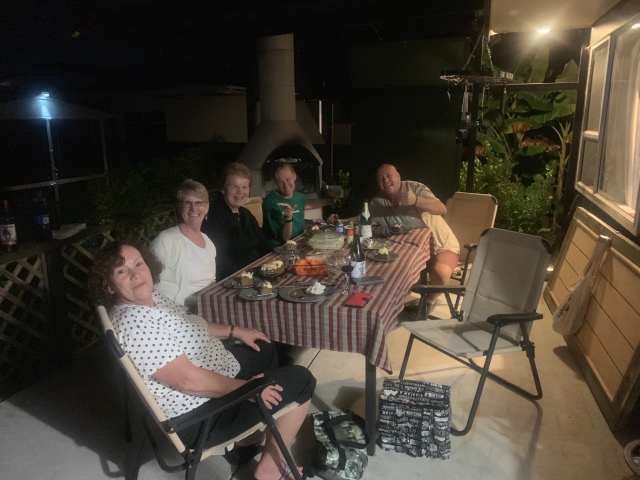